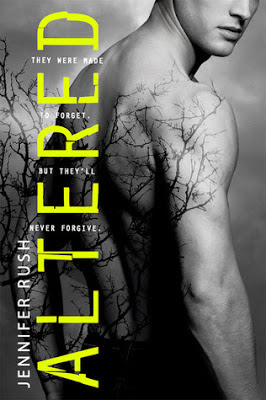 When you can’t trust yourself, who can you believe?

Everything about Anna’s life is a secret. Her father works for the Branch at the helm of its latest project: monitoring and administering treatments to the four genetically altered boys in the lab below their farmhouse. There’s Nick, Cas, Trev . . . and Sam, who’s stolen Anna’s heart. When the Branch decides it’s time to take the boys, Sam stages an escape, killing the agents sent to retrieve them.

Anna is torn between following Sam or staying behind in the safety of her everyday life. But her father pushes her to flee, making Sam promise to keep her away from the Branch, at all costs. There’s just one problem. Sam and the boys don’t remember anything before living in the lab—not even their true identities.

Now on the run, Anna soon discovers that she and Sam are connected in more ways than either of them expected. And if they’re both going to survive, they must piece together the clues of their past before the Branch catches up to them and steals it all away.


Have you ever watched a Bruce Willis movie only wished it was someone hotter and a little younger starring as the main charcter? (No offence to any BW fans, of course.) Well.. Let me tell you something. Multiply the wished hotness factor by four and add two awesome personalities in addition to one hot tempered and one more calculated persona, not to mention the first 1/3 of the movie featuring these four guys shirtless. This is exactly what you're getting out of this book! I didn't know that, but it certainly didn't hurt either, thehhee. I just loved the sound of the synopsis. Overall I liked it, but let's get down to business and discuss it more thoroughly.


' Hope is a waking dream.' I let the words echo in my head. The quote reminded me of that feeling you get when you start to wake from a dream you don't want to leave. That crushing sensation in the center of your chest, like you are losing an important piece of yourself you won't ever get back.


I found myself captivated by the mystery which was one of my favorite parts. The plot literally had non-stop action once it started and that was a blessing as well as the downfall of the book. It was rather nice to see a plot constantly moving and concentrated on solving the unsolvable mystery, but at the same time it didn't let me connect with the characters on the level I would have liked to and I concider myself an emotionally invested reader that envalues the emotional connection above everything else so that was a shame. At some point I even felt like I was watching a round in Call of Duty. Nevertheless, I found myself surprised by some of the reveals which was awesome. As frequent and avid readers we come to expect most of the plot twists at certain point, but the mystery in this one was definitely not a bad thing.

What I enjoyed the most about this book were the dynamics between the boys. I would have loved to see even more of that. There were so many fascinating things about each of them as individuals and put together they made a power fist so strong that they could have taken on anyone. Out of all of them I liked Trev the most. Hmh.. Yeah. If you've read the book, you can probably guess what I'm thinking right now. Anyway, moving on, I hope these relationships will be explored to even bigger depth in the sequel and hopefully that'll let us get more emotionally invested in the story as well.

“I think he’s delirious,” Cas said.
“Don’t die on me,” I ordered.
“I wouldn’t dream of it,” he said right before he passed out.


At first I wanted to give it a 4, because the beginning was really different and I enjoyed the writing style and the characters. Then.. Something shifted in me and I felt like even though I was fascinated by the plot and mystery, the dynamics of the group as well as the personalities of the boys, then due to certain specifics in the polot I didn't connect with Anna emotionally and I felt like I didn't know her. Nevertheless, I really enjoyed it and I will be looking forward to the release date of the sequel. PS. I'm super glad that Jennifer didn't leave a cliffhanger at the end, now I can live in peace for the next year while waiting.

For those of you who're thinking about purchasing a copy, you can read the first four chapters of Altered here.