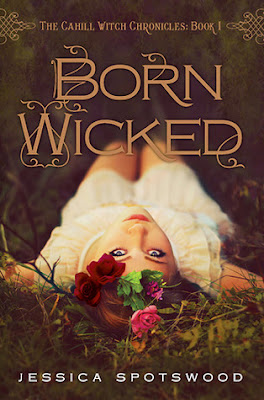 Everybody knows Cate Cahill and her sisters are eccentric. Too pretty, too reclusive, and far too educated for their own good. But the truth is even worse: they’re witches. And if their secret is discovered by the priests of the Brotherhood, it would mean an asylum, a prison ship—or an early grave.
Before her mother died, Cate promised to protect her sisters. But with only six months left to choose between marriage and the Sisterhood, she might not be able to keep her word... especially after she finds her mother’s diary, uncovering a secret that could spell her family’s destruction. Desperate to find alternatives to their fate, Cate starts scouring banned books and questioning rebellious new friends, all while juggling tea parties, shocking marriage proposals, and a forbidden romance with the completely unsuitable Finn Belastra.
If what her mother wrote is true, the Cahill girls aren’t safe. Not from the Brotherhood, the Sisterhood—not even from each other.

Whenever I pick up a book, I usually look at the average rating of my friends on Goodreads, because I only accept/request friends whom I have similar taste in books, therefore, I usually enjoy the same books that the majority of my friends seem to have liked as well. This happened with Born Wicked. I seldom read books about witches, but this novel held a tiny bit of literary magic in its pages with writing, plot and characters.

"To protect the people I love, I'd do it all over again."


The most intriguing part of the book was the prophecy and I loved watching Cate develop friendships with other young witches whom I didn’t know to suspect [being witches] at first. When we got to know them a little better, I realized that they had an agenda of their own, but I wasn’t sure if it was good or bad. Also, the prophecy part was sooo alluring. I found myself wanting to know more and more about it, even though I guessed the ending of the prophecy as soon as it was revealed in its not-entire form. It reminded me somewhat of The Prophecy of the Sisters by Michelle Zink, but it’s not that complex nor is it gothic, but the problem is that it will be true no matter what and it has deadly consequences for some people. I’m afraid for Cate and her loved ones.

Since the witchery is forbidden, a lot of time is spent on Cate worrying about her future. She falls recklessly in love with a basically forbidden love interest while her childhood friend declares his love for her and asks her hand. If she doesn’t make her choice soon, according to the rules, her choice of husband isn’t hers to make, but the brotherhood’s and Cate doesn’t want to be married to a guy the same age as her dad. Talk about awkward, right?!

The romance is quite a steamy one considering it’s the era of 1890. I loved it though. Yes, I’ve heard the complaints about there being not that much witchery stuff, but honestly, I didn’t mind the romance at all in this case, but let's bare in minds that these three young sisters are just coming to their powers. The romance goes well with Cate’s inner struggle to be true to herself, be a good sister and keep her promise to her mom without being discovered by the brotherhood. Plus, there’s the sisterhood which wants her all to themselves. I felt Cate’s struggles and worries and she became a dare character to me. I most definitely want to know what happens next for this young, courageous, sweet heroine of ours.

I’d say that it’s foremost a romance story right now with witchery elements and an historical environment surrounding it. I don’t mind at all though, because I found the romance to be beautiful and everything worked well for me in this case. I loved this lovely, poetic and gorgeous writing style as well. Dude, I can’t wait to know what happens next! That ending? All these intrigues? Oh, boy. I. Want. More. If you want to explore some stories about witches and magic, be sure to give this series a try.

Oh, and I listened to the audio version which the narrator managed very well. She was a joy to listen to.


By the way, doesn't this book have a gorgeous trailer? It's awesome!