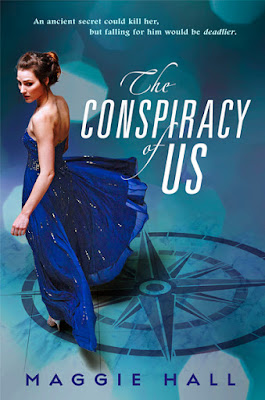 A fast-paced international escapade, laced with adrenaline, glamour, and romance--perfect for fans of Ally Carter.

Avery West's newfound family can shut down Prada when they want to shop in peace, and can just as easily order a bombing when they want to start a war. Part of a powerful and dangerous secret society called the Circle, they believe Avery is the key to an ancient prophecy. Some want to use her as a pawn. Some want her dead.

To unravel the mystery putting her life in danger, Avery must follow a trail of clues from the monuments of Paris to the back alleys of Istanbul with two boys who work for the Circle—beautiful, volatile Stellan and mysterious, magnetic Jack. But as the clues expose a stunning conspiracy that might plunge the world into World War 3, she discovers that both boys are hiding secrets of their own. Now she will have to choose not only between freedom and family--but between the boy who might help her save the world, and the one she's falling in love with.


I had heard some mixed things prior reading, but since I had quite a few Audible credits, I decided to go for it last summer since some of my favorite people *cough* Eri, Sue, Jess, Katie and Zee *cough* seemed to have enjoyed The Conspiracy of Us quite a bit. Here's a short list with my thoughts:


As a whole I thoroughly enjoyed it and am eagerly looking forward to the next two books :) My pre-order of Map of Fates couldn't come fast enough, tbh! PS. Thanks to the gals mentioned above for the group convo that made this reading experience possibly even more fun ♥♥♥


My The Conspiracy of Us inspired picspam can be found here, on my Tumblr.
[Click on the photos to view them in HQ.] 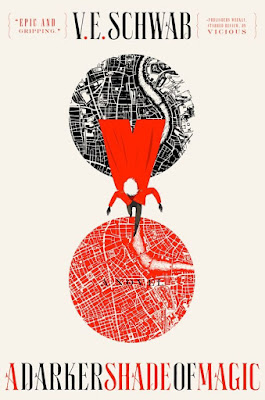 Kell is one of the last Travelers—rare magicians who choose a parallel universe to visit.

Grey London is dirty, boring, lacks magic, ruled by mad King George. Red London is where life and magic are revered, and the Maresh Dynasty presides over a flourishing empire. White London is ruled by whoever has murdered their way to the throne. People fight to control magic, and the magic fights back, draining the city to its very bones. Once there was Black London—but no one speaks of that now.

Officially, Kell is the Red Traveler, personal ambassador and adopted Prince of Red London, carrying the monthly correspondences between royals of each London. Unofficially, Kell smuggles for those willing to pay for even a glimpse of a world they’ll never see. This dangerous hobby sets him up for accidental treason. Fleeing into Grey London, Kell runs afoul of Delilah Bard, a cut-purse with lofty aspirations. She robs him, saves him from a dangerous enemy, then forces him to another world for her 'proper adventure'.

But perilous magic is afoot, and treachery lurks at every turn. To save all of the worlds, Kell and Lila will first need to stay alive—trickier than they hoped.


You know, I had owned Victoria's The Archived and The Unbound for about a year or almost two before I finally picked up The Archived and read the brilliance. It was pretty much love at first sight and I can't wait to tackle The Unbound sometime this year. I had never really been pulled towards ADSoM or Vicious though, but after reading the gem that was TA, I just had to give ADSoM a try and IT WAS AMAZING!

So super duper that glad this was a daily deal on audible. Boy was this fun and different! I love the characters and my favorite character is probably Lila—a cross dressing thief slash pirate; what a spunky source of fire and charm that one! She is courageous, intense and adorable all the same. Also, Kell and [his step-brother] Rhy are both fantastic and I love that Kell supports Rhy's sexuality. (It isn't said what his sexuality is, so I don't want to label it, but he is attracted to both men and women.) Rhy is so funny and cute, I just have allllll the feels tbh whenever he's in a scene. The love and concern the brothers share for each other is super endearing. Also, something happens at the end of the book that really sets the tone of their relationship for the following books and I can't wait to see how this situation plays out.

I really enjoyed the overall plot as well even though it was a bit slow in parts. The world is really cool and there is lots of room to explore different Londons + the traveling aspect between the realms was done well; I quite enjoyed the portrayal of the effect that magic has had on each territory and how it can easily corrupt a soul if one isn't careful enough.

My only complaint is that perhaps the narration was a bit over the top and the chapters read a bit weird on audio? I couldn't tell what chapter I was on because of the part numbers in each chapter. This is partly the reason why I'm getting the A Gathering of Shadows in hardcover; not at all beacuse the covers are amazing or anything and definitely nothing to do with 500 pages of what is most-likely-a-piece-of-amazingness...... nope, not at all!


My A Darker Shade of Magic inspired picspam can be found here, on my Tumblr.
[Click on the photos to view them in HQ.]