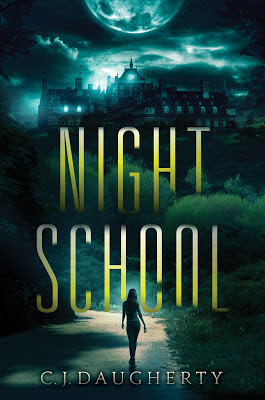 
Allie's world is falling apart... She hates her school. Her brother has run away. And she's just been arrested. Again.

Now her parents are sending her away to a boarding school where she doesn't know a soul. But instead of hating her new school, Allie finds she's happy there. She's making friends. And then there's Sylvain, a suave French student who openly flirts with her. And Carter, the brooding loner who seems to have her back.

Soon, though, Allie discovers Cimmeria Academy is no ordinary school. Nothing there is as it seems. And her new friends are hiding dangerous secrets.


The way I got this book is a funny coincidence. I watched the unwrapping ARCParty of Epic Reads and I saw that everyone was so ecstatic about Night School. I then discovered that I had it as a TBR already on GR. I didn’t pay much attention to its author, because I knew it hadn’t come out in the States yet and I don’t request for ARCs that often. A few days after I went to my local library here in Estonia and came across a book which from Estonian translates to Night School in English. Since the covers were so different, I didn’t know it was THAT book until I got home and marked it as reading. LOL, imagine my surprise when I found out I got to read a book that most of the peeps haven’t even read yet. It was translated from the UK version and I’m happy I got to read it since it was pretty good!

“I wish for his own sake that he'd have a big steaming cup of calm the hell down.”

This book is about politics, secrets, relationships and mystery in a private school where our protagonist, Allie, finds herself after another arrest by the police. Her brother ran away from home and she’s so torn up about it even though she doesn’t admit it to herself. Her parents don’t know what to do with her protest attitude so they send her away, too, in hopes of her becoming better. Soon Allie realizes that there is more going on than it seems at first sight.

I read it practically in one sitting and the mystery kept me on my toes throughout the whole book. I kept waiting for some supernatural creatures, especially vampires, to show up but, color me surprised, again, because there weren’t any. I think there are some in the sequel, but I would never know, because I'm not going to read the sequel (more on that in the next paragraph). There were murders, though, and the secrets that surround the school history and what the pupil in the Night School department do, who belong among them etc – it just drove me insane. In a good way, if that’s even impossible. Allie is a snarky heroine and her curios, but rational mind is what sets her apart from others in this book. Her friends were all a little crazy, but it was fun watching them interact and do stuff like play cricket or tennis in the middle of the night.

What I didn’t enjoy was the love triangle. I liked Carter. I really did! However, I didn’t like Sylvain. Quite honestly, I loathed him. There are mild spoilers ahead, so if you don’t want to read them, just skip the end of this paragraph! Okay. Consider yourself warned! If someone were to molest me, I could never EVER look at them the same way again or want anything to do with them. By mistake I learned what goes down in the next book with the love triangle and I hate this news so much that I won’t be continuing this series. I don’t care if you redeem yourself, you are not redeemable if you force yourself on a girl!!!! I'm afraid of what kind of a message it sends to young girls out there  reading this book and it’s a pity, because I really enjoyed this book.

So that being said, I found this book to be a mix of Hogwarts without magic, but a touch of crime and secrets. Some horrible things happened, mystery was suspenseful and the characters were quite intriguing. Since I accidentally read some spoilers on GR and found out what happens next, I won’t be continuing with this series, because as much as I liked this book, I loathe what happened in one scene and it is not redeemable in my eyes. This is a thing I cannot forgive and since Allie does, I dislike her character as much as his. Other than that, I think it’s a good book and worth exploring.