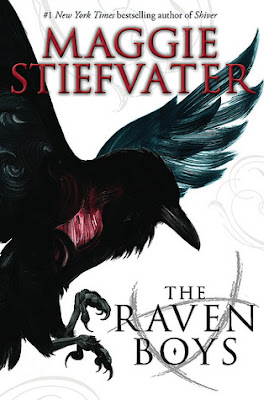 For as long as she can remember, Blue has been warned that she will cause her true love to die. She never thought this would be a problem. But now, as her life becomes caught up in the strange and sinister world of the Raven Boys, she’s not so sure anymore.
From Maggie Stiefvater, the bestselling and acclaimed author of theShiver trilogy and The Scorpio Races, comes a spellbinding new series where the inevitability of death and the nature of love lead us to a place we’ve never been before.


Maggie Stiefvater is made of something else entirely, I tell you! I have never been a fan of wolf books, but somehow she made me fell in love with her wolves that were so natural, organic and it was a completely different take on these creatures. Well, ladies and gents, she slams again with another magical story filled with Celtic myths, passion, destiny and secrets. It’s completely unique and fascinating to its core and it’s bound to make you wholeheartedly invested in the story.

As always, it takes time to adjust to Maggie’s lyrical writing which, in all honesty, is indeed magical and also kinda fairy tale-ish. Moreover, Maggie’s books and world building are always full of fantasy, but they feel so real and truthful that it’s easy to connect with the characters and find something relatable in all of them. At first I wasn’t sure if I was going to get used to different 3rd person POV-s, but it paid off and it felt to me as if I was one step ahead of our gang, but I could still be taken aback by some of the surprises.

The romance definitely takes the backseat in this story, but its presence is always there and sometimes it’s so close you can almost taste it, but not quite. The characters and their personalities add spice to an otherwise just adventurous and mysterious story. By the end I was so fascinated and caught up in the story that I was sad to see that I had reached the acknowledgements. There were two things that somewhat bothered me: 1st –  I would have loved to see more of the dynamics between the boys. I adored every single one of them in my own way and their interactions, history and relationships were really the heart of the book; 2nd – the action and the real quest to find the source of Gansey's obsession could have begun sooner.

In a nutshell, Maggie Stiefvater, you are made of magic and evil! I adored this book, but THAT cliff hanger? I want the sequel now! I knew I should have put reading The Raven Boys off as long as possible;) Oh well.. Dear September 5th – I’m waiting for you! I think there’s so much more to explore and the bomb that was revealed an the end? Yes, yes, yes! That’s all I have to say. Oh, and team Gansey, too:) *blushes*