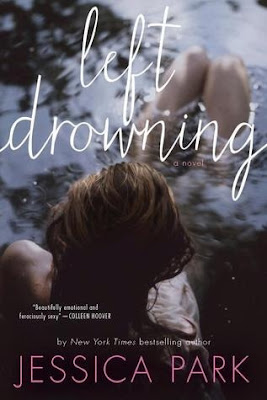 What does it take to rise from life’s depths, swim against the current, and breathe?
Weighted down by the loss of her parents, Blythe McGuire struggles to keep her head above water as she trudges through her last year at Matthews College. Then a chance meeting sends Blythe crashing into something she doesn’t expect—an undeniable attraction to a dark-haired senior named Chris Shepherd, whose past may be even more complicated than her own. As their relationship deepens, Chris pulls Blythe out of the stupor she’s been in since the night a fire took half her family. She begins to heal, and even, haltingly, to love this guy who helps her find new paths to pleasure and self-discovery. But as Blythe moves into calmer waters, she realizes Chris is the one still strangled by his family’s traumatic history. As dark currents threaten to pull him under, Blythe may be the only person who can keep him from drowning.

It's been almost a year since I purchased Flat-Out Love in paperback. If a book is sold here, in Estonia, where we have 1.3 mln people and bookstores are the size of a three-room apartment, it's a pretty big deal if your book is being sold here. I saw ONE copy of it in my favorite store I like to go frequently and purchased it right then and there. There was no question if I was going to leave it to someone else. No! I wanted it all to myself. I haven't read it, but I will this winter. I've already written it in my calendar lol. I've read the first four chapters and I found it enjoyable, but it truly felt like a winter read for some reason so I put it on hold. I was expecting lots of awesomeness from Left Drowning and having talked to Jessica on twitter, I felt that this was going to be awesomesauce. Oh well..

“Your parents died. Your world fell apart."
I nod.
He puts his hand on my cheek. "You were left drowning"

The story. We have the same old same old--a broken hero and heroine. It's not another rape story nor is it a 'bad boy redeemed by the good girl'. No, it has its twists and turns which make the plot unique. Blythe is suffering from a heavy weight of guilt--killing her parents, not being able to save them when they died, destroying her brother's career as a soccer player. She's empty, trying to fill herself with numbness by drinking herself to obliviation. One day she meets Sabin who becomes her best friend quite soon. Note that she doesn't have any other friends in the campus before meeting Sabin. Christopher is Sabin's brother and they meet unexpectedly during one morning and form an instant connection. Blythe finds solace in Chris's brothers Eric and Sabin and their sister Estelle. They're all broken to pieces and their friendships starts to heal every single one of them in their own time, however, their suffers are far from over.

My thoughts. Ahhh, this is so hard for me to write. I didn't form any connections with Blythe whatsoever. She wasn't relatable to me and even though I believed her connection with Chris, I didn't feel the love. When they meet, Blythe spills the beans about her guilt in the first 20 minutes. They fit together well, I agree, but that was so soon. They fall in love against all odds, but don't get involved for quite some time. When they finally did, Chris screwed up so big that I became to loathe his character. It isn't a critique to Jessica's writing by any means, it's just something personal towards Chris. I understand his reasons, but my goddddd, he was such a jerk by doing this. Scratch that!! I didn't understand at all. How.. Oh, man! I didn't like the insta-love either. The reason behind their instant connection is explained later on, but it still didn't feel natural to me.

It isn't only about love though. Blythe forms connections to all of Chris's siblings. The stongest connection she had was with Sabin. I didn't like his character. I didn't get his humour, I didn't laugh at any of his jokes and their friendship wasn't that well developed for me. I don't get how they could form such a great friendship without us having seen it. It was too quick just as Blythe's relationship with Chris. There were 4 relationships I enjoyed: Estelle and Blythe, Eric and Blythe, Eric and Zach and, last but definitely not least, James and Blythe. That last one was the reason I kept turning the pages. Blythe and her brother James were the heart of the story for me. I didn't cry a single tear during this read, but I was close to tears when I read about these two. Their story is so raw and the road to healing was painful. I was happy with the way things worked out between them by the end of the book. I had my doubts if they were going to make it okay as being able to be brother and sister one day again and I was glad that they overcame their issues.

Overall, I do think that my disappointment may come down to many things. One of them being hype and the other being expectations. It's not just another broken characters get together story, it's a journey of healing and quite an original take on the shattered pasts. I just wasn't able to form connections with any of the characters and the best part of the story for me was the MC and her brother. I think it would have worked better as a dual point of view because Chris didn't steal my heart and he remained a mystery to me even after all the revelations we got. Perhaps having a look into his mind would have given me some sort of a connection with him. It wasn't a total fail for me and I'm still everexcited to read Flat-Out Love. Jessica is a good writer and in this case I'm pretty sure it was ME, not the book. I advise you still to give it a try and if you want a different opinion, Rachel at The Reader's Den absolutely adored this pretty and her review is gorgeous. Read on, lovelies!