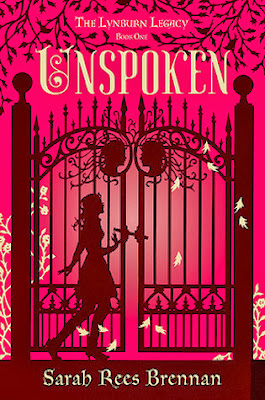 Kami Glass loves someone she’s never met . . . a boy she’s talked to in her head ever since she was born. She wasn’t silent about her imaginary friend during her childhood, and is thus a bit of an outsider in her sleepy English town of Sorry-in-the-Vale. Still, Kami hasn’t suffered too much from not fitting in. She has a best friend, runs the school newspaper, and is only occasionally caught talking to herself. Her life is in order, just the way she likes it, despite the voice in her head.
But all that changes when the Lynburns return.
The Lynburn family has owned the spectacular and sinister manor that overlooks Sorry-in-the-Vale for centuries. The mysterious twin sisters who abandoned their ancestral home a generation ago are back, along with their teenage sons, Jared and Ash, one of whom is eerily familiar to Kami. Kami is not one to shy away from the unknown—in fact, she’s determined to find answers for all the questions Sorry-in-the-Vale is suddenly posing. Who is responsible for the bloody deeds in the depths of the woods? What is her own mother hiding? And now that her imaginary friend has become a real boy, does she still love him? Does she hate him? Can she trust him?

I've read about people having so many mixed feelings regarding this pretty and I must admit that it made me intrigued to know which category won me over–the haters or the lovers. After reading, I can say that it's neither. I honestly didn't hate this book, but I didn't love it either. However, cross my heart and hope to die, I did enjoy it. Let's get down to business and break it down piece by piece.

The story. Kami is a very ravenous journalist craving for new stories to showcase them in her school newspaper. When the infamous Lynburns return to her hometown, strange things start to happen and Kami feels the strong need to invastigate what's wrong, who these people are and what do they want with her town. After all, the legends don't say a lot of good about them. Then, she discoveres that the voice of a boy inside her head isn't a voice at all–it's one of the young Lynburns and he isn't exactly happy that Kami turned out to be real.

My thoughts. I listened to an audiobook and, in my opinion, the narrator did a great job. It was hard to get into at first, but once I got the hang of it, the reading experience became quite enjoyable. She made Kami sound very quirky and exciting, rather than a nosy clueless MC as some of the readers see her. I had heard so-so things, but it's been a lot of time since the book was published so I had mostly forgotten other people's thoughts and it paid off big time! I went into it expecting nothing and I believe that helped me enjoy the book way more. Plus, I enjoyed the humor. Like the quote above, it made me at least smile if not laugh.

I found the town itself to be awesome! Coming from a small town where rumours and small talk are the jazz, it was fun to see how presumtions and rumours can form a story. I also didn't know who to trust since someone was supposed to be behind all of this nonsense what started to happen after the Lynburns returned and I really didn't know who it was. All these different connections among the cast and their relationships are complicated, therefore, it takes a while to grasp everyone's full identity and intentions. I'm usually pretty good at guessing things and predicting the big bad, but the joke was on me this time since I couldn't pinpoint one certain person as opposed to multiple suspects. Also, turns out, Kami and one of the Lynburn boys are tied for a reason and it goes back to wayyyy before they were even born. The history of the Lynburns was my favorite part of the story and I hope it'll be explored to even more depth in the sequel. Oh, and despite the cliché, I'm all for team Jared. Ash is not the one for Kami, that's for sure.

I enjoyed discovering all the revelations and for me it wasn't as bad as some people claim it to be. I agree, it didn't raise to its full potential, but as I've stated before, some of my favorite series haven't all gotten 5 stars for the first book. I will definitely read the sequel and I hope that the Lynburn legacy will be explored to further depth and the villain will create havoc among our beloved characters because it'd be interesting to see who's strong enough to survive, emotionally and physically, and what's next to come.