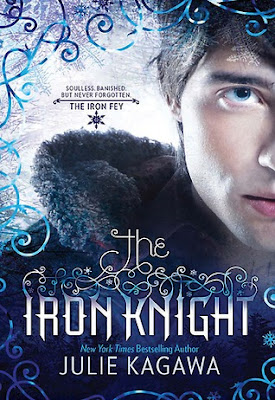 Ash, former prince of the Winter Court, gave up everything. His title, his home, even his vow of loyalty. All for a girl… and all for nothing.

Unless he can earn a soul.

To cold, emotionless faery prince Ash, love was a weakness for mortals and fools. His own love had died a horrible death, killing any gentler feelings the Winter prince might have had. Or so he thought.

Then Meghan Chase—a half human, half fey slip of a girl— smashed through his barricades, binding him to her irrevocably with his oath to be her knight. And when all of Faery nearly fell to the Iron fey, she severed their bond to save his life. Meghan is now the Iron Queen, ruler of a realm where no Winter or Summer fey can survive.

With the (unwelcome) company of his archrival, Summer Court prankster Puck, and the infuriating cait sith Grimalkin, Ash begins a journey he is bound to see through to its end— a quest to find a way to honor his solemn vow to stand by Meghan’s side.

To survive in the Iron realm, Ash must have a soul and a mortal body. But the tests he must face to earn these things are impossible. At least, no one has ever passed to tell the tale.

And then Ash learns something that changes everything. A truth that turns reality upside down, challenges his darkest beliefs and shows him that, sometimes, it takes more than courage to make the ultimate sacrifice.

The fourth book of “The Iron Fey“ series is from Ash’s point of view. It was interesting to hear his side of the story, although, it’s not a parallel story to the previous books, it’s a sequel, but at times he thinks about the past events and we get some glimpses on his toughts during those moments.

At the beginning, I wasn't the biggest fan of Meghan, but she grew on me. I liked Ash, Puck and Grimalkin from the very start though, therefore, it’s an extremely awesome, sad, gruelling, dangerous and hilarious journey to follow these three on. Ash needs to earn a soul for himself if he wants to have a life with the love of his life, Meghan, because he cannot enter nor survive in the Iron Kingdom. Puck and Grim join him on this adventure and together they're about to discover the land of faeries like they’ve never done before. They also receive an ally they all considered dead. Well, except the caith sith. He knows everything in this world. The thing is, he only says something when necessary and in this case it was important not to mention anything before it was supposed to happen.

This whole situation made me really mad. Especially when Ash was on this journey to earn a soul for Meghan and something like this happens.. I didn’t like it. I liked that he got over this issue in the end, but I was not happy how it all started.

Anyway, Puck’s hilarious as usual. Grim brings his A game, too. Ash – at times a hero, at times a total wreck – is cool to. It’s fun and different seeing things from his point of view. I can only wish tha Kagawa will someday write another story from Puck’s POV and we get to hang out with this awesome fellow even longer. It’s unfortunate that this series has come to an end. I really, really loved the main characters and thought that the more this series progressed, the better it got. Luckily, Kagawa will release a spin-off series of Meghan's brother Ethan pretty soon and we’ll get to enjoy the faery world she’s created a little bit longer.

I did not fancy the first book so much due to all the descriptions, because in my opinion, it was just too much, but it’s okay, otherwise I wouldn't know anything about this crazy, crazy world Puck, Ash and Grim live in! I liked them all and found this series a hell of a lot fun. I definitely recommend “The Iron Fey“ books and advise you to read them. You will not regret it!

"I'm going to kill you one day," I told him as we hurried after Grimalkin, back into the swampy marshland. It was not an idle threat.
Puck just laughed. "Yeah. You and everyone else, prince. Join the club."

“Be careful, boy. In some tales, the hero gets eaten by the monster after all.”

“Quick question.” Puck’s voice broke the silence. “Did anyone think to bring a can of Off?”

"My rabbit! Grimalking, you sneaky, gray...pig! I hope you enjoy that, 'cause the next thing over the fire might be you!"

"Nice of you to come after us, ice-boy," he drawled. "If I didn't know better by now, I'd almost think you cared."

Trailer – I think it's beautifully done and if you've read (at least one of) the books, you'll love the ending of this as much as I do!
Posted by Siiri at 7:47 PM