Review: Under the Never Sky by Veronica Rossi 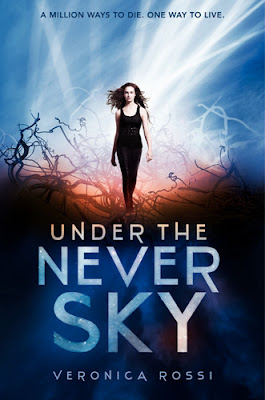 Aria has lived her whole life in the protected dome of Reverie. Her entire world confined to its spaces, she's never thought to dream of what lies beyond its doors. So when her mother goes missing, Aria knows her chances of surviving in the outer wasteland long enough to find her are slim.

Then Aria meets an outsider named Perry. He's searching for someone too. He's also wild - a savage - but might be her best hope at staying alive.

If they can survive, they are each other's best hope for finding answers.

I recently watched the first two seasons of Game of Thrones and it’s funny, because Under the Never Sky is a dystopian book where two worlds collide: the one with all those extremely advanced gadgets and technology items and the other with that Game of Thrones feeling, but without the constant nudity. This interesting world is compelling enough to draw a reader in, but the complex relationships, betrayals and unexpected allies are what really color the story.

"They called the world beyond the walls of the Pod 'the Death Shop.' A million ways to die out there. Aria never thought she'd get so close."

Quoting what’s on the back cover of my paperback: “Worlds kept them apart. Destiny brought them together.” I really think it’s the most accurate statement for this book. Aria and Perry *sigh* are the complete opposites starting from their background and upbringing to their personalities. They take on this journey together and born enemies soon become forced allies to reach the ones they love the most.

It’s safe to assume that I enjoyed this novel, but even though I was extremely fascinated, I found it hard to pick it up from the corner of my table the next day. On the other hand, once I was in this world again, it was almost impossible to put it away. The flow of the story is a cliché, of course, à la enemies become friends, then lovers etc, but there are some unique twists as well and the creatures that Perry and Aria meet in the Wilds are beyond interesting.

I don’t think I can write this review without at least mentioning the amazingness that is Roar so let’s just put it that way: I’m freaking excited to read Roar and Liv’s novella. I think he is an awesome supporting character that brings out if not the best in both, Aria and Perry, then at least their potential to be extraordinary. It’s safe to say that I like him a lot.

She looked up. “A world of nevers under a never sky.”
She fit in well then, he thought. A girl who never shut up.

In the end, it wasn’t exactly perfecto, but it was really good and I will definitely follow Aria and Perry till the very end of this series. I’m happy that I don’t have to wait forever to read the sequel, because the ending made my hands really itchy for Through the Ever Night to see how the story enrolls from here. I give this book a decent thumbs up and if you haven’t read it yet, at least check it out. Oh, and it's over 50% on sale on The Book Depoitory so get it while you can. (I'm not sure if it is now, when this review is published, though. If it isn't, then hopefully they'll put it on discount again. It's been that way two times already.)

PS. I like the UK cover more than the US one. I’m usually all about the US covers, but this time UK’s beats it by a mile. It doesn’t seem as pretty on a picture though, I discovered that myself once I received my copy of the UK version. It’s gorgeous!