Sizzling Summer Giveaway and Excerpt by A. W. Exley

Today I have the pleasure to give you the chance to win awesome prizes, but also an excerpt of Nefereti's Heart by A. W. Exley. I have been very curious about acient Egyptian culture and mythology etc and I can't wait to read this book myself, it sounds  really good. I hope you enjoy the excerpt and be sure to participate in this amazeballs giveaway! Good luck, lovelies! 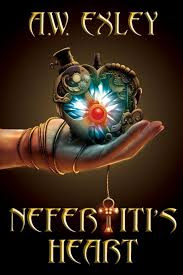 Nefertiti’s Heart By A. W.Exley Cara Devon has always suffered curiosity and impetuousness, but tangling with a serial killer might cure that. Permanently.
London, 1861. Impoverished noble Cara has a simple mission after the strange death of her father - sell off his damned collection of priceless artifacts. Her plan goes awry when aristocratic beauties start dying of broken hearts, an eight inch long brass key hammered through their chests. A killer hunts amongst the nobility, searching for a regal beauty and an ancient Egyptian relic rumored to hold the key to immortality.
Her Majesty’s Enforcers are in pursuit of the murderer and they see a connection between the gruesome deaths and Cara. So does she, somewhere in London her father hid Nefertiti’s Heart, a fist sized diamond with strange mechanical workings. Adding further complication to her life, notorious crime lord, Viscount Nathaniel Lyons is relentless in his desire to lay his hands on Cara and the priceless artifact. If only she could figure out his motive.
Self-preservation fuels Cara's search for the gem. In a society where everyone wears a mask to hide their true intent, she needs to figure out who to trust, before she makes a fatal mistake.


Picking up the corner of her skirts, she stepped into the carriage and took the bench seat facing backward. The Villainous Viscount, known in society as Nathaniel Trent, Viscount Lyons, occupied the opposite side.
Cara guessed him to be approaching thirty, young for his position in the underworld, but he had spent ten years ruthlessly climbing to the top. He was reputed to be the head underworld figure in London and beyond. His family had no fortune to match their titles, so he set about acquiring one. With a formidable head for business, he established an airship cargo company. It generated a healthy income stream on its own, plus had the added benefit of providing an excellent front for his illegal activities, and extended his reach far beyond London. He simultaneously repulsed and attracted society. He was titled, rich, bad to know, and deadly to cross.
And he's handsome.
He was tall, his legs taking up an inordinate amount of room in the plush carriage. Her eyes ran up over highly polished, black boots and muscular thighs. Heading farther north, she took in his powerful torso in a formfitting, grey frock coat. He wore his black hair short and his sideburns narrow and long, emphasising his strong face and square jaw. A shiver ran down her spine as she met his steel-blue gaze.
"You shot my men."
At least he got straight to the point, no inane social niceties. She would never have to worry about inviting him over for tea, crumpets, and chitchat.
"They were trespassing in my house and tried to rob me." She undid the buttons on her jacket. The interior of the carriage constricted around her; the heat from his dominating presence caused the temperature to rise.
"I've killed men for doing less." His tone was well modulated, with no change in inflection nor any hint of anger; they could have been discussing the weather.
"So have I." She held his gaze. She could play his pissing contest all day if he wanted. He wasn't getting his hands on her father's notebook. Lord Devon sold her into slavery and nearly beat her to death when she escaped. Her father owed her a large debt, and with his notebook secure, she intended to collect a small portion of her due. She was going to enjoy breaking up his valuable collection of antiquities as much as she enjoyed smashing his stupid, precious clock.
"Keep your men out of my house, unless you want to lose them permanently." She shifted on the seat. Her jacket fell open to reveal the shoulder holster with the gun nestled close to her chest. A custom Smith and Wesson with a carved ivory handle, the delicacy of the bone co-ordinated with the cream silk lining of her jacket. She made her threat without blinking. Let him discover she was no blushing English rose. She had thorns.

Anita is a writer living in rural New Zealand, surrounded by horses and homicidal chickens. Being a bona fide corset wearing, sidesaddle riding freak, probably explains her fascination for historical novels :) She loves to blend steampunk adventures with an Egyptian twist, and turn up the heat.