Review and Giveaway: Stir Me Up by Sabrina Elkins

I have been waiting forever to post this review and today I'm excited to share my thoughts with you thanks to this great blog tour hosted by YA Bound Book Tours. You can follow the rest of the tour here. At the end of the post is a giveaway and I wish you all good luck! 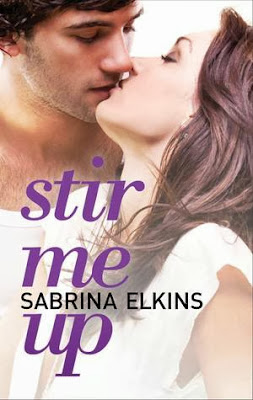 Cami Broussard has her future all figured out. She'll finish her senior year of high school, then go to work full-time as an apprentice chef in her father's French restaurant, alongside her boyfriend, Luke. But then twenty-year-old ex-Marine Julian Wyatt comes to live with Cami's family while recovering from serious injuries. And suddenly Cami finds herself questioning everything she thought she wanted.
Julian's all attitude, challenges and intense green-brown eyes. But beneath that abrasive exterior is a man who just might be as lost as Cami's starting to feel. And Cami can't stop thinking about him. Talking to him. Wanting to kiss him. He's got her seriously stirred up. Her senior year has just gotten a lot more complicated….

I first heared about Stir Me Up on Nick’s blog. I admit, I was put off by this: look who’s on the cover yet again! It’s Sztella and Pepe. I am not a fan of these two anymore because they’re just.. everywhere. Something about Nick’s review made me want to read this though and what with a cute New Adult novel, romance and cooking – this couldn’t have been any better for me to get hooked.


“I rest my head against him when our mouths break apart, and breathe him in. I love the smell of him, that mysterious, perfect, warm, delicious taste that is him.”

I really liked Cami as a character. She wasn’t overly snarky, impatient, bitchy nor was she a humble, shy average girl who doesn’t stand up to anyone. She was rather a mix of all of these (with the exception of being bitchy, which she was not), but it was her love for cooking and passion for something else than just boys that won me over. Also, this book captured the perfect kind of friendship where best friends encourage the other to follow one’s hearts and support one another. Tracy, Cami’s best friend, wasn’t this man-eater kind of a girl who is described by every cliché imaginable. Yes, she liked her boys, but she was cute as a button when it came to her personality.

Julian. Le sigh. What can I say about this injured war vet who possesses so much wisdom in his young mind? I’m not sure I can do him justice so I’ll just leave it at this: I LOVED HIM. His determination is one of the sexiest things about him. Also, I liked how the portrayal of the relationship was quite a natural one and when the parents find out about this relationship, they aren’t exactly very welcoming. Especially Cami’s dad and even though I may have not approved his reaction, I liked that it was real and definitely showed that he cared more than he led on in the previous happenings of Cami’s life.

There were two issues for me and hopefully this explains why this book doesn’t get full four stars from me. First of all, I found the writing to be lacking in some departments. Let me give you an example:

[Cami and Julian are talking in bed]
“…. . He’ll have to see there’s a purpose in it somewhere.”
“Move this,” he says. He shifts me around so he can rest his head on my stomach.
“I should have thought of this months ago. …”

What exactly does Cami have to move? O.o There were multiple scenes where I didn’t get what happened in the middle of a dialogue, because it wasn’t shown to us. I’m not a very visual reader, but I do appreciate the effort to create a setting. Secondly, I found the ending to drag a little. I was ready for it to end about 4 chapters before it did. It was a nice ending though, just the way I like it. Very natural, realistic and hopefully pleases all romance fans.

All in all, I very much loved this piece. I hope that the previous paragraph explained why I can’t give it 4 stars, which it definitely deserves, but I did have a few issues.. so. Yeah. I think it’s perfect for people who love New Adult, cute romance and great characters and want to break out of the NA trend that’s becoming a little cliché with very little originality. Do I recommend? Yes, most definitely.

Rating: 3.5 out of 5 stars
*Thank you to HarlequinTeen and YA Bound Book Tours for providing a review copy.*

I am a former journalist who worked for the Los Angeles Daily Newsand other newspapers in the greater Los Angeles area. Prior to this I worked in advertising, writing ad copy for corporate travel accounts and major motion pictures. My first job out of college was as an administrative assistant to an executive chef and a food & beverage director at a Four Seasons hotel. I also spent some time working as a prep cook for Spago in Beverly Hills.
I received my Master's degree in Journalism from the University of Southern California. While in graduate school, I had the privilege of studying fiction writing under renowned author Hubert Selby, Jr., and comedy writing under famed comedian Shelley Berman. I am a past participant of the Squaw Valley Community of Writers Summer Writing Workshop.
Raised in the woods of Vermont, I now live in the greater Los Angeles area with my husband and three children. STIR ME UP is my first novel.