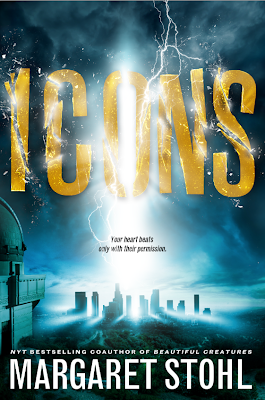 Your heart beats only with their permission.
Everything changed on The Day. The day the windows shattered. The day the power stopped. The day Dol's family dropped dead. The day Earth lost a war it didn't know it was fighting.
Since then, Dol has lived a simple life in the countryside -- safe from the shadow of the Icon and its terrifying power. Hiding from the one truth she can't avoid.
She's different. She survived. Why?
When Dol and her best friend, Ro, are captured and taken to the Embassy, off the coast of the sprawling metropolis once known as the City of Angels, they find only more questions. While Ro and fellow hostage Tima rage against their captors, Dol finds herself drawn to Lucas, the Ambassador's privileged son. But the four teens are more alike than they might think, and the timing of their meeting isn't a coincidence. It's a conspiracy.
Within the Icon's reach, Dol, Ro, Tima, and Lucas discover that their uncontrollable emotions -- which they've always thought to be their greatest weaknesses -- may actually be their greatest strengths.

I want to rant so bad, but I’m trying to contain myself. Ok, here we go. I’m glad that Stohl is trying to branch away from the Stohl-Garcia duo and the idea of this book is breathtakingly awesome, however, sometimes things just don’t always work out the way we want them to and this was exactly the case here. I didn’t fancy this book and I probably will not continue with the sequel. Let me tell you why.

The book starts out great. We have Dolores and her best friend Ro and I really enjoyed their dynamic. They complement each other quite well and find solace in each other. They are each other’s rocks. As the novel progresses, they begin to grow apart though. Ro is doing everything in his power to keep them safe from the government that is trying to capture them, but Dol’s poor choices and putting trust in strangers rather than her best friend still manage to get them locked up on an island with two other teens. I really liked the idea of the story, but unfortunately, for me, it didn't live up to the awesome premise. What I’m trying to say is that the execution wasn’t as good as I hoped it’d be. The world building was pretty good, though very complicated (and I still don't understand some of it), but the characters honestly ruined it for me.

I don’t know how much it would have affected me if I had read a physical book or an e-copy, but I listened to an audiobook and I was honestly confused about the parts which were for the ambassador eyes only. Alsu, quite often, I felt extremely creeped out by them. You know, the parts from the book? Speaking of the book, you have no idea how annoyed Dol made me with her actions by giving the book away. You are told to not let the book out of your sight and you give it up to a stranger without reading it first? *eyeroll* Also, her voice and inner monologue were so similar to Ethan White’s which didn’t help her case either.

Again, we have a love triangle. Can a book not be without a love triangle? You can tell right off the bat that Ro has feelings for Dol and all she has eyes for is Lucas. Who, by the way, is a nasty little brat. He went rogue on every decision the other three Icon Children made and acted like a darn fool all the way through. His decisions made me roll my eyes and I’ll say that he and Dol deserve each other. I’m shipping Ro and Tima since he deserves someone who isn’t Dol. Tima became my favorite character, quite unexpectedly at that. I blame the dog. I’m a dog person and she saved one. What can I say? I’m impressed.

I didn’t hate this book, but I liked only tiny bits of it and it wasn’t enough for me to want to pick up the sequel. For the sake of everyone, I hope it gets better and perhaps, if people who gave Icons less than three stars decide to give the sequel a go and convince me that it’s worth continuing? Perhaps I’ll reconsider, but for now, I’m done with this series. I hope you guys had better luck with it though. PS. It doesn’t take anything away from the book nor does it affect my opinion on the plot and the characters, but I liked the original pink cover way better.