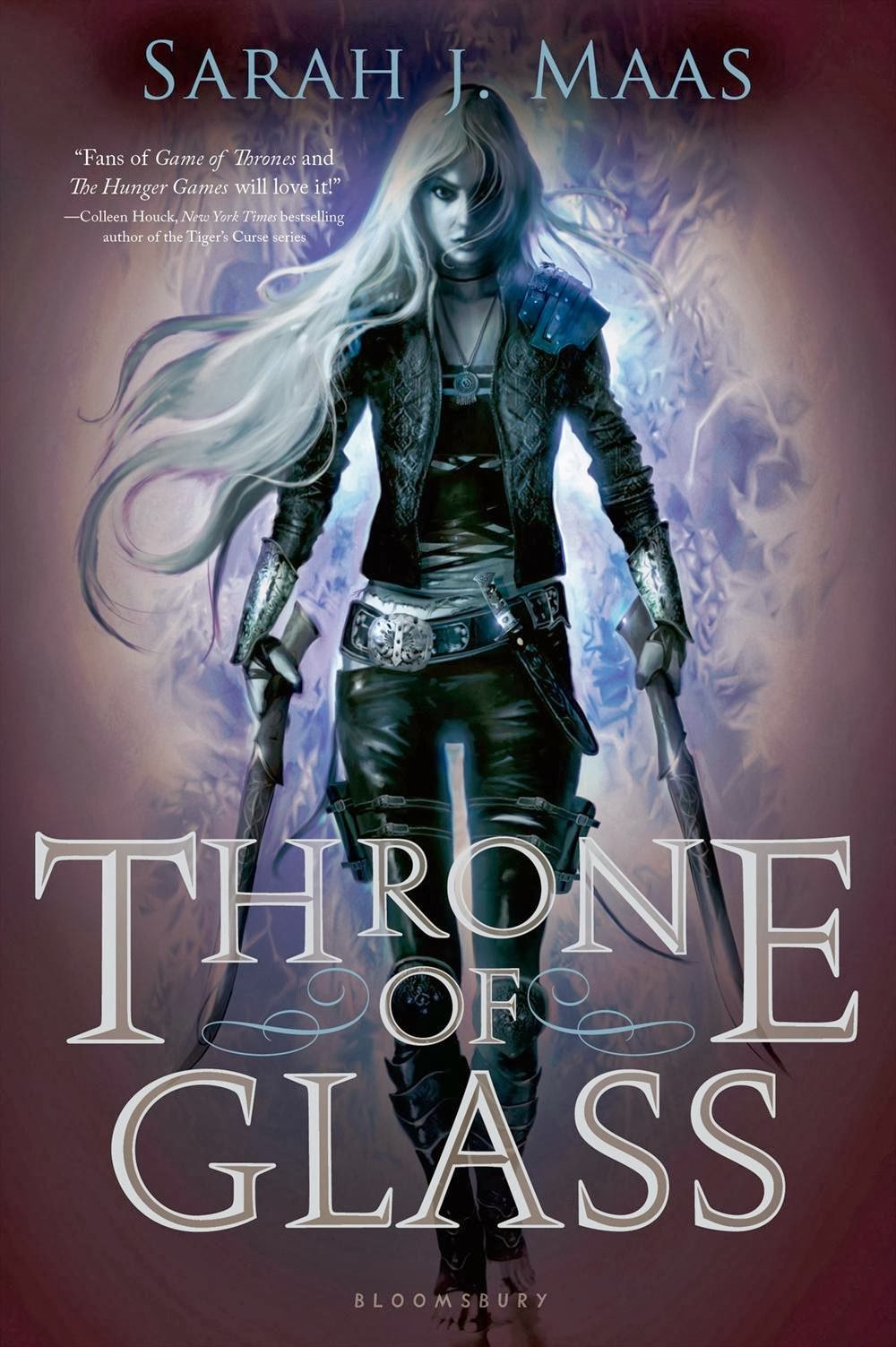 In a land without magic, where the king rules with an iron hand, an assassin is summoned to the castle. She comes not to kill the king, but to win her freedom. If she defeats twenty-three killers, thieves, and warriors in a competition, she is released from prison to serve as the king's champion. Her name is Celaena Sardothien.

The Crown Prince will provoke her. The Captain of the Guard will protect her. But something evil dwells in the castle of glass--and it's there to kill. When her competitors start dying one by one, Celaena's fight for freedom becomes a fight for survival, and a desperate quest to root out the evil before it destroys her world.

Honestly, I have kept my eye on this series ever since I discovered it on Goodreads during summer 2012. I’m not quite sure what has kept me from reading it so far, but there’s no excuse since this book... This book was brilliant! My review is mostly about the characters because that’s what makes this thrilling read so special. There are a million things I liked about Throne of Glass, but since I don’t want to bore you all to death, I’m going to name a few. *My apologies though, after writing my review, I couldn't help but notice that it's forever long. I am truly, terribly SORRY, BUT NOT THAT SORRY, my friends:)*

“Sometimes, the wicked will tell us things just to confuse us–to haunt our thoughts long after we've faced them.”

It isn’t a New Adult novel per se, but I really appreciate the fact that the characters are all older than 16. Celaena is 18, Dorian is 19 (if I’m not mistaken) and Chaol is 22. They are still young, but they aren’t in their teenage years. Don’t get me wrong, they’re still searching themselves, but they are way past the beginning of the search. There were five points of views in this book, but the king and Kaltain rarely spoke to us.

Most of the story is told by Celaena who is an amazing heroine. Her strength was so inspiring. What she has had to endure in her life have made her a captive inside her emotional walls and I enjoyed reading about Dorian, Chaol and Nehemiah breaking these walls down piece by piece. Also, her character is full of contradictions and I love it! The way she can kill a man without breaking a sweat is just one side of this wonderful girl. Celaena is a great friend; she has a wicked sense of humor, drools over books, loves to dress well and come on! She devours a half bag of chocolate in one sitting. What’s not to like?!

Dorian and Chaol. What can I say about these two young men? I really came to care about both of them and even though I’ve been team Chaol from the beginning, I have no issues with Dorian. He’s a prince while Chaol doesn’t have that privilege and they’re still friends. They’re honorable, great and caring. I think that Celaena is the best thing that could have happened to either of them since she brings out the best qualities about them and vice versa. My only problem is that I wish there had been more Chaol POV. Oh, and after that thank you hug in ch. 53? I can’t wait to read Crown of Midnight.

There were three side characters I truly enjoyed. One of them was Nox—the evercharming fellow competitor of Celaena. He brought brightness to the training and these Tests for the king’s amusement and I wonder if we’ll see him in the future. I sure hope so.

Then we have Nehemiah. She was absolutely stunning as a person and her fierce loyalty to her people and her country was breathtakingly beautiful. I adored her friendship with Celaena. You know, there were two times my eyes got misty during the process of reading Throne of Glass and both of them were when I read about these two girls. It’s rare to find a friend like that.

The third character I found absolutely compelling was Duke Perrington. Say whaaat???? O_O “But Siiri, how could you find that appalling man appealing in any way?” Well, my dear, I’d say that I wasn’t charmed by him in any meaning of the word, but his cunning personality just intrigues me to no end. I wonder what his end game is and I can’t wait to see what he and the king have planned for next. It’s going to be bloody, I’m sure of it.

I won’t start telling you about the world because it’s something you have to experience yourself. If you’ve read the book, you know what I’m talking about. I also adored the writing which was intimate even though it was from third person point of view. I rarely enjoy these kinds of narratives, but Maas made me feel like a character in the book rather than a reader outside the book. What’s more, the plot was rather nicely paced. I did feel a bit forced to pick it up when I was about halfway through, but I guess it was needed for character development, because despite being fantasy, this novel is very character-driven. From what I’ve heard, the sequel is non-stop action and plot-twists so… you probably get my excitement.

I think my last review with such length was Clockwork Princess, but I hope you don’t mind a tad longer review this time. There was truly so much going on and the book was magical just as everyone claims it to be. I can’t believe these books won’t stop until 2017. I know, right? That’s plenty of goodness to look forward to ;) If you haven’t read Throne of Glass yet and love fantasy, swoon-worthy romance, kick-a characters and a great plot, I don’t know why you're still sitting here, reading this review. Go grab it!!!