Review: My Heart for Yours by Steph Campbell and Jolene Perry 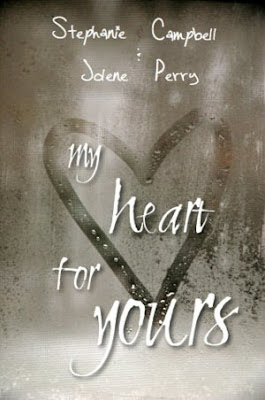 For Tobin and Delia, everything was always equal. A bargain, a trade, a deal to be struck.

A kiss for a kiss.
Your shirt for mine.
Break my heart, I’ll break yours.

Their disastrous split was no different. Tobin’s spent the last year pretending Delia never existed, and Delia’s been in D.C., pretending to be anything but the country girl that she is.

When tragedy brings her back to town, Tobin and Delia realize that time apart hasn't healed either one of them. But staying away from each other is harder than they imagined, especially in small town Louisiana, and old feelings are quickly brought back to the surface. In the mess they’ve created, is there anything to be salvaged of a love that they both thought would be forever?

It's a very emotional story about young lovers. The female protagonist Delia is from a wealthy family and living under his father's rules and has to obey practically his every order. She doesn't want to and sometimes, when she's at her bravest, she speaks for herself, but things usually end up the way her dad wishes. Her mother has alcohol problems and her homelife in general isn't that great, because appearences are everything and the Senator's daughter has to behave in a way that is expected from her.

“The problem with passion is it goes both ways. Love/Hate. The line between those two is a lot thinner than I thought.”


The male protagonist Tobin is a cool kid and very much in love with our young lady, however, her dad practically hates him and breaks them apart. Also, there's a secret looming over this former young couple. A secret so terrible and extremely sad. They say their goodbyes and try to move on with their lives. Both of them have reasons to hate each other, but no matter how stronger the hate, love and longing are stronger, even if left unsaid.

When Tobin's brother dies, Delia returns with her family in order to attend the funeral and pay her respects. Emotions are boling and they're burning a hole through Tobin's heart as well as Delia's. It brought out my tears and got me angry. It also brought a few smiles and made me laugh.

“Always a trade. Always a compromise. Until there wasn't anything left to bargain with, because neither one us had any clue what to do.”


I didn't think it was the best novel I've read and there are a few minor things I didn't enjoy, however, it was a pretty easy (but markably devastating) read and I liked the journey these two lovebirds took me on. If one could take away a few tips on how to not mess up one's life and how to make things easier for oneself, it would be to not choose to be a coward and take responsibility for one's actions as well as to stand up for ones rights and opinions and not be bullied by anyone, including the people who're supposed to love you the most. Be who you are and don't back down just because someone thinks he knows better. You know yourself. You know your limits. You know who you are. You know your dreams, goals, secret desires. You know better when it comes to your life.