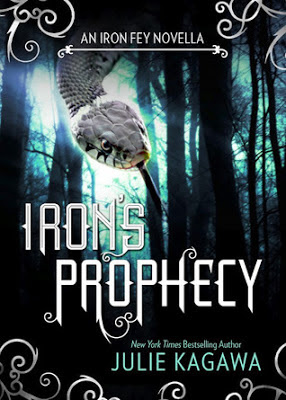 
Meghan Chase is finally getting used to being the Iron Queen, ruler of the Iron Fey. Her life may be strange, but with former Winter prince Ash by her side at last, she wouldn’t have it any other way.

But when they travel to the Summer and Winter courts’ gathering for Elysium, the oracle from Meghan’s past returns with a dire prophecy: “What you carry will either unite the courts, or it will destroy them.” Now Meghan faces a devastating choice that may determine the future of all fey—and her and Ash’s unborn child…

This is quite honestly a significate series of the wicked fey, teenagers, starcrossed lovers, friendship, emotions, action, magic and adventures. I admit, I was sceptical when I read The Iron King and I gave it only two stars (although, looking back at it, I feel like I was overly critical), but I still gave the sequel a try. I'm really happy I did, because these books just got better and better as the series progressed and this novella gave me hope that Kagawa has not gotten tired of the fey and does them justice in the spin-off series featuring Meghan's brother Ethan as the protagonist.

“Well,” Puck said cheerfully, forcing a rather pained smile, “it’s just like old times, isn’t it? You, me, ice-boy, the future of the Nevernever hanging in the balance…we just have to wait for Furball to show up and then it’ll be perfect.”
“He is already here, Goodfellow,” came a familiar voice behind us, sounding bored and offended all at once. “Where he has been for much of the conversation, waiting for you to see past the end of your nose.”
“Yep.” Puck sighed as we all turned to face Grimalkin. “Just like old times.”


I have grown to love Meghan like she was one of my girlfriends. I adore that Meghan has gotten snarkier and more sarcastic. She's grown so much and I can't express my grattitude to Kagawa for writing her as an envolving teenage girl. I hated her at first, but now she's one of my favorite heroines. If you've read the whole series, you know what I'm talking about. Her actions regarding the Iron Kingdom, the fey, human society, her beloved ones and everyone around her are truly impressive and honourable. Meghan is not that little insecure, scared and confused teenager she was when we first met her. She is the ruler of a powerful kingdom, a beautiful, wise woman and a strong person.

It's funny how in the beginning Ash couldn't express himself or, at times, didn't want to. He wasn't raised to be expressive in the Winter Court. Now, a little wiser and a little older, he shows his vulnerable side to Meghan every day, loves her with all his heart and he & Puck get along great. I love that combo between these once-friends-then-sworn-enemies-now-friends-again fey, btw! Grimalkin, Meghan, Ash and Puck have all sneaked their way into my heart and whenever I read about them in the previous books, novellas or in some of the upcoming fey books, I will devour these stories with the biggest delight in my heart and the biggest smile on my face.

“Whatever you discover, you’re not alone. You have me, and Puck, and a whole kingdom, ready to stand beside you at a word. There is nothing the oracle can reveal that will make us abandon you.”


I may as well mention that these books have given me endless butterflies by Ash and unbelievably many LOL moments by Puck and Grimalkin. The three of them in addition to Meghan couldn't be any different as individuals, but together they make an extremely powerful team which could take on anyone who wants to pick a fight with them. This book in particular was entertaining and even though it was a novella, it felt like a real book filled with all kind of greatness one could possibly imagine. I tried to do a mini-review, but since I couldn't stop writing, as you can see, it became a full review. If you're a fan of the series, pick this up and read it before starting The Iron Fey: Call of the Forgotten, because what happens in this one, sets up the motion and tone for the spin-off series which I'll be happy to devour once I've received my paperback:)