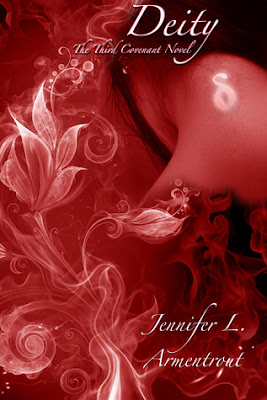 
"History is on repeat, and things didn't go so well the last time. "

Alexandria isn't sure she's going to make it to her eighteenth birthday--to her Awakening. A long-forgotten, fanatical order is out to kill her, and if the Council ever discovers what she did in the Catskills, she's a goner... and so is Aiden.

If that's not freaky enough, whenever Alex and Seth spend time "training"--which really is just Seth's code word for some up-close and personal one-on-one time--she ends up with another mark of the Apollyon, which brings her one step closer to Awakening ahead of schedule. Awesome.

But as her birthday draws near, her entire world shatters with a startling revelation and she's caught between love and Fate. One will do anything to protect her. One has been lying to her since the beginning. Once the gods have revealed themselves, unleashing their wrath, lives will be irrevocably changed... and destroyed.

Those left standing will discover if love is truly greater than Fate...

Okay, so here’s the deal! I found Pure, the second novel in this series, pretty fascinating and I thoroughly enjoyed it. Everyone was extremely excited about Deity and some of the readers even claimed it was the best book they have ever read. Ever!! Taking that into account it was natural that I had very high expectations. I can say that I was satisfied, but unfortunately Deity did not meet my expectations. Let me tell you why.

His gaze fell to the god. He sneered. “You want to fight me now, in your
true form?”
“I will fight you in any form, you little punk-ass brat.”
Seth laughed. “You can’t kill me.”
“But I can beat the living snot out of you.”


I find it incredibly irritating when a book in a series ends and the next one picks up three months later. Or even more. Deity didn’t disappoint in that area, because we find out what happened after that final battle in Pure and how things have enrolled from there. Alex is back in Covenant and trying to figure out how to deal with all that she encountered in New York. When she receives an unexpected message from Laadan, she doesn’t know how to digest the news. I kind of already figured that one out in Pure, but in case you didn’t, then know that this bomb is big!

The beginning was great, but then everything kind of stilled. I looked forward to all the action and fighting, but there was practically none and when it did happen, it was minor. Deity was more of an emotional journey for Alexandria and I felt like she lost her spunk and spark a little bit. I know how much she's been through during the past year, but all these misty eyes and weak knees were really annoying. She’s becoming a woman and isn’t that irrational fire cracker she was before, but there’s something missing. Maybe it’s just me though.

As for the other characters, I’m completely in love with two of the side characters – Marcus and Deacon. I’ve felt warmth and sympathy for both of them from the very beginning, but as the series has progressed, I’ve come to love them even more. The most exciting thing was probably the Gods making their appearence. I found their interaction with Alex and the crew absolutely thrilling and I can’t wait to get more of them intervening into the power games of the Covenant society and trying to take each other down while giving it their all to stop the history from repeating itself.

And then we have the love triangle. Look! I have got nothing against Seth nor do I dislike Aiden, but this triangle is just god-awful! We all know who she is going to end up with so why the heck did all of that happen in Pure? For Alex to have these "confused" feelings? Everything was turned upside down in Deity and on top of that these stupid spoilers were everywhere on Goodreads. I didn’t read any of the reviews to avoid that exact thing, but somehow some huge fan didn’t put spoiler tags while commenting on different topics. Then she excused herself by claiming her information "not-spilery". Well, dude, it was! Also, I'm so sick and tired of reading about Aiden's eyes changing colour. I get that already and why cannot there be a chapter without mentioning the colour change? I just don't get that. I've probably never rolled my eyes on that kind of a thing before. I think he is great, a little too copy cat of Dimitri Belikov and his zen lessons, but great nonetheless. Alex just needs to get a grip already, for god's sake!

“Yeah, I'm great. Nothing like witnessing a death match between gods when I'm trying to get some Cheetos.” – Deacon


At the end of the day it wasn’t a bad piece of work by Jennifer, but quite an ordinary one considering how much I’ve enjoyed her previous work. Also, I’m aware that my rating isn’t impartial, because the book was pretty much spoiled for me. Unintentional or not, it still bugged the heck out of me. I found the action lacking and characters losing their original wickedness and greatness. Therefore, I cannot give this book a 5 like almost every other blogger out there. I expect more from Apollyon and hopefully it’ll redeem the things I felt were lacking in this one.