Giveaway: A Song for Julia by Charles Sheehan-Miles

Charler Sheehan-Miles has been on my authors-to-discover radar for quite some time now and A Song For Julia sounds like a novel I would enjoy so it's no surprise that I was extremely excited when I got an email to participate in this event. I've got a chance to share an excerpt from this novel and down below is a giveaway for you to take part in. Keeping my fingers crossed for all of you:) This is truly a prize I'd be most delighted to win! 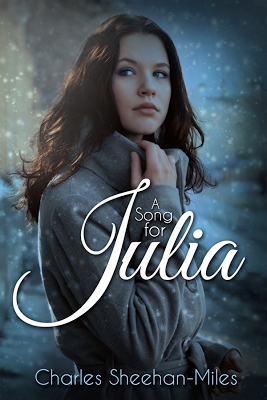 Everyone should have something to rebel against.

Crank Wilson left his South Boston home at sixteen to start a punk band and burn out his rage at the world. Six years later, he's still at odds with his father, a Boston cop, and doesn't ever speak to his mother. The only relationship that really matters is with his younger brother, but watching out for Sean can be a full-time job.

The one thing Crank wants in life is to be left the hell alone to write his music and drive his band to success.

Julia Thompson left a secret behind in Beijing that exploded into scandal in Washington, DC, threatening her father's career and dominating her family's life. Now, in her senior year at Harvard, she's haunted by a voice from her past and refuses to ever lose control of her emotions again, especially when it comes to a guy.

When Julia and Crank meet at an anti-war protest in Washington in the fall of 2002, the connection between them is so powerful it threatens to tear everything apart.