Review: Gameboard of the Gods by Richelle Mead 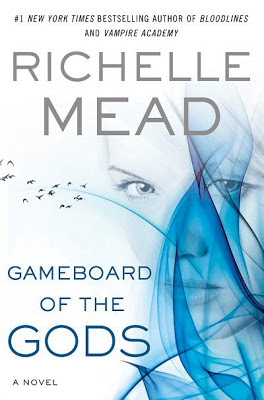 Title: Gameboard of the Gods (The Age of X #1)
Author: Richelle Mead
Published: June 4th 2012
Add It: Goodreads
Purchase: Amazon | Barnes & Noble | The Book Depository
*An ARC was provided in exchange for an honest review*


In a futuristic world nearly destroyed by religious extremists, Justin March lives in exile after failing in his job as an investigator of religious groups and supernatural claims. But Justin is given a second chance when Mae Koskinen comes to bring him back to the Republic of United North America (RUNA). Raised in an aristocratic caste, Mae is now a member of the military’s most elite and terrifying tier, a soldier with enhanced reflexes and skills.

When Justin and Mae are assigned to work together to solve a string of ritualistic murders, they soon realize that their discoveries have exposed them to terrible danger. As their investigation races forward, unknown enemies and powers greater than they can imagine are gathering in the shadows, ready to reclaim the world in which humans are merely game pieces on their board.

I have read 3 series by Richelle Mead and have yet to read a book by her that would be a disappointment. Seriously! I know I have given two stars to Frostbite (Vampire Academy #2) for instance, but it was just a rating based on how I felt it being a little weaker than the rest of the books in that series. If I didn’t delve on those things, I’d give them all 5 stars since her books seriously never disappoint. Gameboard of the Gods is the first book in one of my newest favorite series.

The story. In a futuristic world, Mae Koskinen is a praetorian – a fierce Nordic soldier who is a part of the RUNA’s military. What makes her so special is that she is a gorgeous, flawless castal. Castals aka pure bloods have suffered from different illnesses, but Mae’s beauty is untouched. Justin March is a servitor in exile. He is called back by his former bosses to investigate mysterious, unsolvable religious murders. He is a plebian aka a normal, mixed-blooded person. Along with them we have another MC – Tessa Cruz – a teenage girl who is an outsider from a province.

My thoughts. First of all, it was a beast! 464 pages full of action. I’m usually not that keen on third person POVs, but Ms. Mead really made it work. Through Tessa’s eyes we see the true colors of RUNA and thanks to her, we learn the most about RUNA as she’s in the same position as we are – a newcomer. We get this futuristic society in its complex world of religion and atheism, advanced technology and fake smiles. At first it all felt very complicated to me, especially since I’m not a native English speaker, but as the novel progressed, the more at home I felt in this world. I liked how the technology advancements were new and intriguing, but not completely incomprehensible to grasp for our minds. Also, the further I read, the more the mythology part came into the picture.

We have an excellent cast of characters and they are all so very different, flawed and difficult to crack. (I didn't care for Tessa as much as I cared for Mae and Justing though.) I was a big fan of how Richelle managed to keep me invested in the mystery and keep the wheels spinning in my head, yet I didn’t figure it all out beforehand, especially who the god bidding on Justin was. That, I should have figured out sooner! I also loved how the romance between Justin and Mae was there, but they’re so proud and stubborn to admit their feelings (even to themselves) that we’ll have to have them fight their feelings for quite some time in this series. Maybe Justin and Mae's POVs, regarding the tone and the thoughts, melted together for me a little, but I still enjoyed them thoroughly.

To sum up my thoughts, I’d say that if you’re looking for a read full of mythology, suspense, mystery, character-built and well-written plot with a touch of romance, pick this up! Richelle Mead has a way of writing books that suck you in like no other and don’t let go until you’ve devoured all of it with your nails bitten. I am eagerly anticipating what’s next to come in this crazy world where humans are the pawns of gods in this intriguing dystopian gameboard. This book is surely not to be missed!