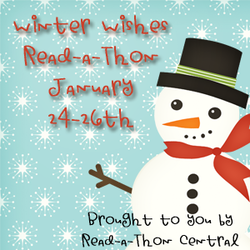 Hey you! I'm going to invite you all to take part of this weekend's Winter Wishes Read-a-thon. I took part of the Summer-Lovin one last year and it was so fun! Since it's so darn cold outside (I'm not complaining though--rain and clouds for a month were tiring me so much and now we finally have snow and sunshine since a few weeks ago--it's actually more like a bliss to sit in front of a fireplace and write this message to you.) and I have nothing else to do anyway, I'm going to read, read and read. At least that's the plan :)

I signed up to Winter Wishes Read-a-thon via Read-a-thon Central and it's hosted by Tamara from Shelf Addiction and Stephanie from Love. Life. Read. You can sign up by clicking here. If you read anything yesterday, you can write that down as your achievement because the event takes place throughout 3 days starting from Jan 24th to Jan 26th. There will be giveaways, twitter chats etc, but the event is mostly for you to get some reading done and perhaps gain some new friends :) I'll be updating the books I've read on Goodreads as well as on the sidebar (with the page count) of my blog.

What did I choose to read?

I'm planning on marathoning Under the Never Sky series by Veronica Rossi in preparation for Into the Still Blue. The books I'm going to read are:

Why haven't I included Roar and Liv? It's simple, actually. I just read it last week (and loved it). It's pretty pointless to read it yet again. That's why. Though it's Roar, so maybe I'll re-read my marked passages and quotes :)

Since I want to include all of you, this is where you come in. You get to choose which one I'm going to read if I have any time left after finishing the first two books and Brooke's novella from UtNS series. I'll take two books that received the most votes and when I'm done with the winner, I'll hopefully start the following one. So, when I have more time on my hands, I'm going to read one (or two) of these:

Incarnate by Jodi Meadows
The Summer I Became a Nerd by Leah Rae Miller
French Kiss by Sarra Manning
The Statistical Probability of Love at First Sight by Jennifer E. Smith

That is one ambitious pile of books here because I'm not the quickest reader in the world and I'm working until 3 pm so that's already half a day lost. I'm not worrying though, if I won't make it to reading anything other than UtNS series, I'm going to read the book with the most votes next week. Just leave your recommendation(s) from this list in the comments (or tweet me if you prefer) and I'll sum up the votes and pick the one with the highest score :)


Let me know if you signed up for this event and have a great weekend, lovelies! x
Posted by Siiri at 8:00 AM