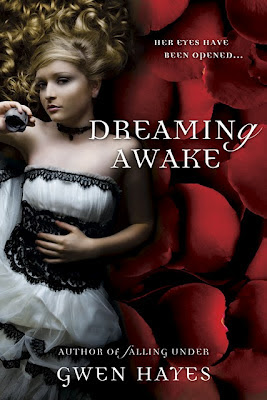 She fell for him in a nighttime world. But the time for dreaming is past—and the here-and-now can be just as fragile their love…

When Theia Alderson first encountered a mysterious, handsome boy in her dreams, she never imagined how finding Haden Black—and falling in love—could change her life. To save Haden, Theia sacrificed everything. And the dangerous bargain she made could have lasting repercussions.

Now Theia has returned to Serendipity Falls, and she finds herself struggling with the same deadly hungers that have tortured Haden. When students at their high school fall prey to a mysterious illness, Theia can’t help but wonder if Haden’s control is slipping—and how much longer she’ll have a grip on her own.

And still the nightmare realm of Under won’t let them go. Someone from Haden’s past is determined to destroy Theia from the inside out, starting with those closest to her, forcing Theia to choose between family and friends and a love that may have been doomed from the start…

Umm.. When one writes only one book, it has to be intense, but cannot be overdone and there shouldn’t be any loose ends. When one writes more than one book, I think there should be an optimal number of them. There’s a saying: the more the merrier. However, if there’re six books or more, sometimes the intensity and the meaning of the story can vanish. But 2 books? Really? One shouldn’t buy two flowers to bring as a gift and one shouldn’t write two books as a series. Okay, one could, but not in a series like this which is dark, intense and could be developed into something really great. I feel quite dissapointed, to be honest.

It is what it is. The two books of this series were original, interesting. The characters were somewhat enjoyable and relatable.They’re lives are not perfect and none of them are completely broken. Donny’s a typical girl who’s afraid to get her heart broken and, therefore, tries to be tough and builds a shelter for herself. Ame doesn’t feel like she belongs and she has trouble working on her gift. Theia’s lonely, too, because her Father’s not adoring or loving. Her home’s like a hotel for her. It’s not warm, caring, loving. These three try to find answers to their problems by relying on each other. It’s easy to connect emotionally with the boys in this book, too.

It truns out that it’s the end of the series. I read on Hayes’ webpage that she doesn’t plan on writing anymore about these characters, but maybe she’ll return to them someday in the future and she feels like Ame’s story needs discovering.

This book was even darker than the first one and it was a very fast read. It seemed to me from the beginning that something was off with Mike, but I definitely had no idea that Ame had caused it. Also, I was sure that Mara will come for her revenge and it doesn’t turn out to be a peaceful surrender by Theia and Haden.

The ending of the book meant the end of one of the main characters. Both of the books were quite dark and scary so it wasn’t that unexpected death, but it was still one of the saddest things about this series. I hoped that it would be someone else, therefore, it was shocking, dissapointing. The ending felt kind of.. Well, I feel like it wasn’t solved. I was dissapointed because so much was left for my own imagination, but during the whole book the author moved towards a culmination, then came a huge decrease in the intensity and.. Oh, okay. I’m being too complicated. I wasn’t sattisfyed with end of the book, because it all felt too simple. They should have been more upset (I know I was), since they lost a dear friend and although they were mourning, the atmosphere felt just too happy. Maybe it was the author’s fault and she should have completed the ending better. I also think that the ending wasn’t that good, because the series consits of only two books and there were too many loose ends.

With the exception of the ending, this little series was quite interesting and different. It was dark enough with a few rays of sunshine.