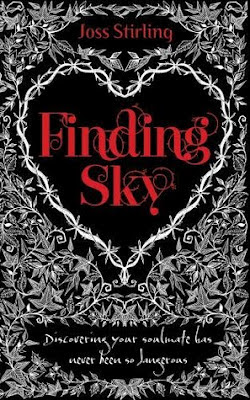 When Sky catches a glimpse of Zed for the first time, lounging against his motorbike at school, she is drawn to him just like every other girl in Wickenridge. But Zed sees something special in her that the other girls don't have. Zed tells her they are both Savants - people with special powers like telepathy and the ability to see into the future. Not only that, she is a Savant too, and his soulfinder - meant to be together.

When a soulfinder speaks telepathically to her partner, it's like all the lights coming on in a building. You lit me up like Vegas. But for Sky it's just not that easy - she's a mystery to herself, haunted by nightmares from her past before she was adopted, and riddled with doubt and insecurity. Just when Sky is slowly coming round to the idea of being with Zed she is kidnapped by a family of criminal Savants. In a chilling twist, Sky and Zed's relationship is put to the ultimate test and the fate of those she loves lie in Sky's hands. Will Sky have the strength to embrace her power and be brave enough to control her own destiny, or will the dark demons of her past prevent her from realising her true potential?

Maybe because recently I’ve read so many book in English and now that I read a translated version of this one, it did not feel as real as it could have felt. I cannot explain it.. Anyway, “Finding Sky“ is from Joss Stirling’s trilogy. The first book of it. I found it from goodreads and it caught my eye due to its beautiful cover. By the way, the two other books from this trilogy are about 2 other Benedict brothers (I think there were 7 in total).

The main character is a girl whose parents were savants and killed each other with their powers. The powers aren’t supposed to be deadly (if not used for those purposes), but every savant has so called other person who aplifies one’s powers and who makes one complete. For Sky it was Zed. Her parents, however, weren’t each other’s soulfinders and when her Mother found hers, her parents had a huge fight and unfortunately killed  each other. Then Sky lived with her aunt and her aunt’s drug dealer boyfriend which was pretty traumatizing until she moved in with her stepparents. Sky’s shy and different and has no idea about hew powers until she speaks with Zed in her thoughts. After that she’s spinning on a head-spinning carousel which she cannot get down from.

The book wasn’t so consuming as I would have liked, I also didn’t get the deal about savants and their powers immediately. I thought they can read thoughts, see the future and maybe predict something etc, but no. It turns out that everyone has their own powers such as seeing the future, reading/influencing emotions, healing etc. In addition, they can speak with each other through their thoughts, give pictures to people’s minds and move things with the power of mind (like lemons while cooking).

When I read ordinary books (not e-books), I usually lend them to different members of my family or my friends and while I had some mixed-feelings about this book, other people liked it a lot, because it had new and different ideas and the writing was okay. Maybe it just wasn’t exactly my cup of tea, tho I don’t have anything bad to say, but it just wasn’t that extraordinary in my opinion. I still bet there’s a moral to remember from this book aside from the pretty cover that’s beautiful to look at.