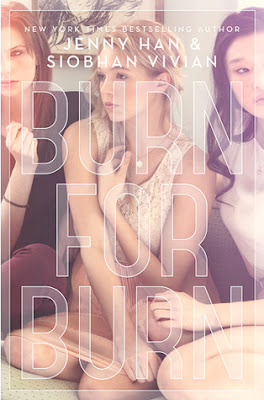 BIG GIRLS DON'T CRY...
THEY GET EVEN.

Lillia has never had any problems dealing with boys who like her. Not until this summer, when one went too far. No way will she let the same thing happen to her little sister.

Kat is tired of the rumours, the insults, the cruel jokes. It all goes back to one person– her ex-best friend– and she's ready to make her pay.

Four years ago, Mary left Jar Island because of a boy. But she's not the same girl anymore. And she's ready to prove it to him.

Three very different girls who want the same thing: sweet, sweet revenge. And they won't stop until they each had a taste.

This book was given to me by the publisher via Netgalley in exchange for a fair and honest review. Thank you, Simon & Schuster.

"No one can ever know what we're up to. What we do together lives and dies with us. And if we're really going to do this, no one can bail halfway through. If you're in, you need to be in until the very end. Until we all get what we want. If not, well... consider yourself fair game. It'll be open season and we'll have hell of a lot ammo to use against you. If you can't swear on that, we might as well just pretend like tonight never happened."

Kat. I liked her the best in the very beginning. She was sassy, sarcastic, hurt, different and the most interesting out of all of them. However, when the story progressed, she became too agressive and vengeful for my taste. I still liked her, but she wasn’t at the top of my list anymore. Kat has been wronged by Rennie –  her former best friend, she has lost her Mom and gone through a lot. She’s tired of Rennie playing games and doesn’t want to sit by and wait for karma to step it up and get back on Rennie for being such an ignorant bitch. Kat wants to do it herself.

Lillia. I found her to be a bit of a snob. She’s a popular, gorgeus cheerleader from a wealthy family. She’s got everything. Until something bad happens to her. She told no, but that didn’t stop things from happening. She tries to forget. To move on. To act normal. Things don’t go exactly as she hopes, because someone from her circle of friends has set his eyes on her little sister Nadia and Lillia decides to protect her at every cost. What happened to her cannot ever happen to her sister. Throughout the book she grew on me the most since she had the most to lose and I felt like her conscience made this story seem more real.

Mary. She’s the quiet one. The new girl. Or is she? She’s a beautiful girl who wasn’t so pretty back in the day. Someone she thought she knew, someone she trusted hurt her in the most crucial way and that's the reason she has spent four years away from this place. But now she’s back. And she wants that person to feel at least a little amount of that pain that broke her. Will she get her revenge?

The plot. Interesting and intriguing. I liked the dynamic between the girls and that it was written from three points of views, therefore, we got glimpses of all of the three girls’ thoughts on both – the past and the present. I found their stories captivating and full of so much hurt, despair, emotion that it was hard to imagine them not doing anything vengeful, although, even considering how much they were hurt, I still think that revenge should never be the way to go.

What suprised me were some of the fantasy elements which definitely came out of the blue. I thought it was just contemporary YA fiction, but there turned out to be a twist – something witchy is going on with one of the girls. I’m so looking forward to exploring that in the next two books. I was so not expecting that, but it was pretty darn cool.

One thing I know for sure is that Rennie is the queen of the kingdom of bitches. She’s so two-faced and full of herself. She thinks she’s the ultimate goddess and everyone actually follows her every move, sentence, thought. I think she’s just an inscure clown, though. She's the character you love to hate. Reeve – he did some pretty terrible things, but on some level, I felt sorry for him. I think deep down he wishes he hadn’t done what he did on that notorious night. Well, one can never be sure though, but I still think there’s some good in him and I really hope I’m right. I feel bad for liking him. Is that weird? After knowing everything he has done? I don’t know.. I liked Alex. I really did, but he confused me with his actions. I wonder how his story will end and whom he'll end up with.

The ending was so, so unexpected! I’m definitely going to read the sequel and I thought this was a very decent start to the series. It was headspinning, funny, exciting, consuming, mysterious, a little bit romantic, emotional and sometimes, yes, a bit scary. It’s hard to think that there are people out there who’ve been wronged the same way and I can only wish that karma will do it’s job, not the ones who’ve been hurt by the bullies. I’d prefer to read about this kind of stuff in a fictional world, not from newspapers or any other media channel for that matter.