Review: What a Boy Needs 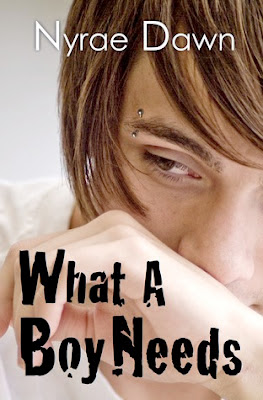 Jaden Sinclair knows he'll never amount to anything...so why would he deserve a girl like Priscilla Mendoza? Since last summer, things have been screwed up between Jaden and Pris. He knows it's his fault, but that doesn’t stop him from wanting to go a few rounds with her new boyfriend. He also knows he’s the loser his dad calls him, but it doesn’t stop him from wanting her. After getting a huge bomb dropped on him, Jaden lashes out and lands himself in jail. Everything in his chaotic life is turned upside down and to make it worse, his mom kicks him out in order to side with his dad. Yeah, he’s totally a prize for a girl like Pris.

Sebastian, Aspen, and Pris are all going places in their lives...and he knows he can't keep tagging along for the ride. The group has one last chance for The Epic Adventure they've been looking for: a road trip to New York, where Jaden's friends will be going to college. Unfortunately, the more time Jaden hangs around Pris, the harder it is to keep the carefully constructed walls between them so she doesn't find out what a train wreck he really is. When the trip ends, Jaden has to decide if he's ready to say goodbye to his friends, and the girl he loves. He knows what he needs, but will he be man enough to go for it? Contains mature themes. Some sexual situations and language.

I fell in love with Bastian and Jaden in What a Boy Wants and I was not left disappointed with them in this book. I liked this novel even more.

A few minutes later, we're in our room while the others are next door. It's one of those rooms with a connecting door and our room has two beds. If this had been a movie, they would have been full so we would have had to share a bed. Why doesn't stuff like that happen in real life?

I found Pris to be cool, easygoing, full of life and one of the best friends one could wish for. Jaden, even though somewhat an opposite, has a strong, determined mind and one of the biggest hearts, too. Actually, all four of them, including Aspen and Sebastian, are like people I have surrounded myself with: protective, fun and trustworthy. I knew something was going on with Jaden's life at home while I was reading the first book, but I had no idea it was that bad. I felt compassionate and just wanted to crawl into the book and give the boy a hug. It was sad.

So.. About the relationship. Jaden is worth more than every boy Pris has ever liked combined and even more! I can easily understand why he didn't realize that at first, because he'd been talked down on every single day of his life. If you're constantly put down by the people who're supposed to love you the most, it's no wonder you can't believe in yourself and have doubts in every step of the way. Pris, however, saw the best in him. She saw through the facade, how broken he was. I just wished he'd open himself up sooner.

There were parts in this book that made me cry uncontrollably and LOL like a person who's lost her mind (like the 'sexy and I know it' scene - oh, boy, that was hilarious!). There were parts where I wanted to smack Jaden against the head instead of letting Bastian do it and there were parts I wanted to console him and tell him everythig's going to be fine and you don't need that crappy family of yours when the real family you have is here, right by your side, no matter what.

I loved the road trip to NYC and wished it could have lasted even longer. I really, really liked the first book and thought this was even better. So if you like guy POVs and you've read the first book, you'll definitely devour this one! A must read!