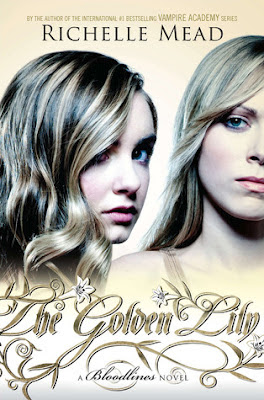 Tough, brainy alchemist Sydney Sage and doe-eyed Moroi princess Jill Dragomir are in hiding at a human boarding school in the sunny, glamorous world of Palm Springs, California. The students--children of the wealthy and powerful--carry on with their lives in blissful ignorance, while Sydney, Jill, Eddie, and Adrian must do everything in their power to keep their secret safe. But with forbidden romances, unexpected spirit bonds, and the threat of Strigoi moving ever closer, hiding the truth is harder than anyone thought.

Populated with new faces as well as familiar ones, Richelle Mead's breathtaking Bloodlines series explores all the friendship, romance, battles, and betrayals that made the #1 New York Times bestselling Vampire Academy series so addictive. In this second book, the drama is hotter, the romances are steamier, and the stakes are even higher.

I’m not quite sure why I didn’t like Bloodlines the first time I read it. I’d read VA like 3-4 times before Bloodlines already (and yes, I’m reading all of them again right now) and I guess I was just unhappy that Sydney wasn’t more like Rose. I read Bloodlines again before reading the Golden Lily and this time I absolutely loved it! Sydney isn’t Rose – she isn’t reckless, doesn’t break rules and she isn’t physically strong. Well, she is, but her physicality isn’t something she uses to protect herself and others. She uses her mind instead of her body. She’s a lot like me and maybe that’s the reason I didn’t fancy her at the beginning since I wanted to read about someone who’s not afraid to take action and not afraid to break the rules. However, she’s grown on me. Now that I’ve got that out of the way, I’m going to continue with TGL review :)

I still don’t enjoy alchemists. In my opinion, they are quite boring and not as fascinating as vampires. In VA the society of vampires was a lot more interesting than this one. All I can say is that I’m starting to get interested, but I’m not on this ship yet. I’ll give them some time to win me over, though.

I loved every single second of the scenes which consisted of either Adrian, Dimitri or Eddie. These three are so swoon-worthy. I love that they’re all completely different yet so much alike. They’d do anything to protect the ones they care about and do not care how many lines they have to cross or what obstacles they have to surpass. Trey also grew on me and I think he should have had more scenes. He’s an interesting figure and I think he has a lot to offer to the storyline, especially after what happened in TGL. The only thing that’s missing is Rose and Dimitri in Palm Springs at the same time and Lissa & Christian visiting, too (Richelle said on her twitter that we’ll see them throughout the series *squee*). Oh, man, how I miss the dashing C. Ozera! One of the best perks of re-reading VA is to re-read his one-liners. He is a kick-ass character!

What did I think about the plot? Well, it had some really interesting twists, but I got a bit tiresome of Ms. Terwiliger and her pushy attitude towards Sydney. I think I know where all of this is heading and I’m already waiting for it to happen so that we could see Sydney be a bit more active in the fighting scenes. I liked that she decided to study some martial arts and I like that she’s not only depending on her brain but also trying to figure out how she can use her body if there should be an attack. The vampire hunter thing has major potential and I’m happy that we got to explore this even more.

As to the teams? Well, I’m definitely team Adrian in this series! In addition, I’m on board with team Eddie. That being said, I’m really, really pissed how things ended in this book and it better be fixed in the third book. It broke my heart to see things fall apart like they did. It was extremely sad. However, knowing Richelle’s work, she’ll make these characters go through hell before she lets them have their happily ever afters and it’s definitely something worth waiting for.

Adrian ordered a martini, earning disapproving looks from his father and me.
"It's barely noon," said Nathan.
"I know," said Adrian. "I'm surprised I held out that long too.”

“Ah, those two. In a fight, they’re lethal. Around each other, they melt.”

“You made your own jean shorts...with a butter knife?”