You Against Me Review 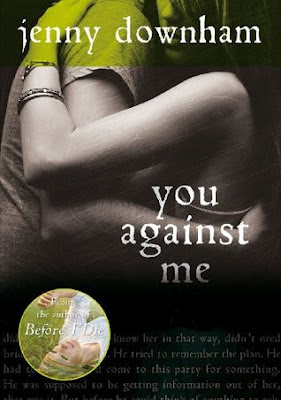 If someone hurts your sister and you're any kind of man, you seek revenge, right? If your brother's been accused of a terrible crime and you're the main witness, then you banish all doubt and defend him. Isn't that what families do?

When Mikey's sister claims a boy assaulted her at a party, his world of work and girls begins to fall apart. When Ellie's brother is charged with the crime, but says he didn't do it, her world of revision, exams and fitting in at a new school begins to unravel. When Mikey and Ellie meet, two worlds collide.

Brave and unflinching, this is a novel of extraordinary skillfulness and almost unbearable tension. It's a book about loyalty and the choices that come with it. But above all it's a book about love - for one's family and for another.

You Against Me is a story about rumors, doubt, lies, games and assumptions. Two families go head to head in a court case where one party claims to be the victim of a rape and the other claims to be innocent. Who's right and who's lying? What really went down on that night?

I liked Ellie for her innocence and for believing in good things. However, I felt like she was a bit naive. She's from a wealthy family. Ellie is smart, pretty and tries her hardest to please her parents. She looks up to her brother Tom, therefore, it's hard to believe that he might do such a horrible thing to a girl her age. She saw Karyn drooling over her brother and definitely someone like her couldn't be telling the truth, right? Ellie's brother is the best brother in the world. How could he ever hurt someone? There's no way, is there? Well.. It's Tom's word against Karyn's. One must stand by your family, no matter what. After all, Ellie is the prime witness, but she can't say something happened when it actually didn't. Or did it? Ellie doesn't remember. So the best thing to do is to protect her family and the brother she loves.

I liked Mikey. He saw how this whole thing affected his family and he wanted to make Tom pay. He must pay for what he did to Mikey's sister. Mikey can't look at the devastating picture of his broken sister and family any longer and decides to take matters into his own hands. He's got a plan: to seduce Tom's sister and get her to spill the beans about him. How could anything go wrong? It's a piece of cake!

Well, as you can guess, something does go wrong: they fall in love. They're both trying to manipulate this relationship to their own advantage, but they're falling fast. And hard. How can you trust someone with your heart and soul if you know they're lying to you and you're lying to them? How can you even want to be with someone if she's the sister of the boy who raped your little sister or he's the brother of the girl who claimes to be raped by your big brother?

Ugh, in five words: it was complicating and sweet. Loved Ellie and Mike, but there were so many secrets and, honestly, I didn't even know who to believe, so how could these two know when they were emotionally attached to Karyn and Tom? I wanted to believe Karyn who was incredibly vulnerable and devastated. I also wanted to believe Tom who was so good to his sister and loved her with his whole heart. Well.. You never know with these stories. I didn't. But my gut instinct was right. I knew who was lying.

This story had its ups and downs, but in the end I thought it was okay and I liked the ending. Oh, and I'm glad that even though it was YA, the author didn't black the reader out during the sex scene, it was done beautifully and it was one of my favorites from YA genre.