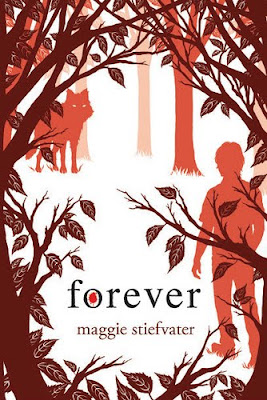 The conclusion to #1 bestselling Shiver trilogy. In Shiver, Grace and Sam found each other. In Linger, they fought to be together. Now, in Forever, the stakes are even higher than before. Wolves are being hunted. Lives are being threatened. And love is harder and harder to hold on to as death comes closing in.

The beginning of this one was just too slow for me. At one point  I found myself cheering for Cole and Isabel more than for Sam and Grace, because for the 2/3 of it Sam was alone and depressed, Grace, well, she was a totally different case. Most of the time I didn’t have a clue what was going on with her. The end of the triology suprised me, because I was sure everyone was going to make it out alive, but during the last chapter I wasn’t so sure of it anymore. Tom Culper really got on my nerves, ugh. By the way, at first, I was convinced that the police officer, who agreed to help Sam, was going to betray the wolves and guide them into a trap, therefore, I was pleasently suprised when he sided bravely with the wolves and protected innocent (well, some of them weren’t that innocent.. cough, cough, Shelby, cough) people, who had to live with this curse of changing. I was literally on the verge of tears at the end of the book when only three of them made it out alive. I liked the friendship between Sam and Isabel and between Isabel and Grace. Grace was the heart of these four young adults. She was the connection between them, connecting three totally different strings: one silky, but ice cold, one black and torned, and one, beautiful and yellow, but a little dull. Isabel was distant and cold, but opened up to Grace and, in my opinion, she was the one who grew the most. Cole was not icy exactly, but careless: he did not care about anything else than himself and Grace (as Sam and Isabel) helped him understand, why caring about people is important, how much it helps one to reach out to others. After all, lets be honest, human beings are social animals and do not stand to be alone for a long time. Sam was caring and loving, but he would not let people inside his world, Grace on the other hand, offered him everything, what seemed to be missing in the first place. She encouraged him and kind of showed him the way towards brightness. To a road without the fears of his past which were holding him back. She helped him get over his fears, caused by childhood traumas and the fear of lonelyness. I think that it’s hard to pick a favorite character out of everyone in this series, because it the end, they all won my heart, but I guess the story that moved me the most was Isabel’s. She was a complete stranger at first (in the „Shiver“). Superior, selfish, cantankerous. She grew the most during the series (well Cole did too, I guess). Finally she had real friends and she became caring, compassionate and strong. I was extremely glad that it turned out good for her.

Reading order:
In conclusion, I can say this: I read all the three books and the first one was my favorite. The other two just didn’t reach to the level set up by „Shiver“, but it was a pretty good series.  It wasn’t that supernatural actually (well, fine, there are no werewolves in real life, but it was pretty  modest compared to some other books/shows I’ve read/watched). It was more of a story about growth, progression, emotions and revealing the souls of these characters. I LOVED the descriptions in the books. They were interesting and easy to read, created a wonderful milieu and therefore it was easy to melt into the book.
Posted by Siiri at 3:06 PM