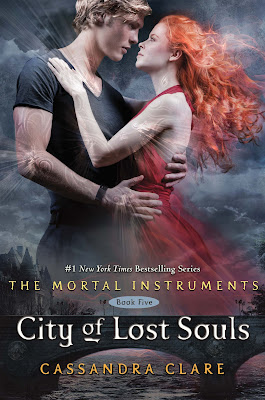 The demon Lilith has been destroyed and Jace freed from captivity. But when the Shadowhunters arrive, they find only blood and broken glass. Not only is the boy Clary loves missing, so is the boy she hates: her brother Sebastian, who is determined to bring the Shadowhunters to their knees.

The Clave's magic cannot locate either boy, but Jace can't stay away from Clary. When they meet again Clary discovers the horror Lilith's magic has wrought - Jace and Sebastian are now bound to each other, and Jace has become a servant of evil. The Clave is determined to destroy Sebastian, but there is no way to harm one boy without destroying the other.

Only a few people believe that Jace can still be saved. Together, Alec, Magnus, Simon, and Isabelle bargain with the sinister Seelie Queen, contemplate deals with demons, and turn at last to the merciless, weapon-making Iron Sisters, who might be able to forge a weapon that can sever the bond between Sebastian and Jace. If the Iron Sisters can't help, their only hope is to challenge Heaven and Hell - a risk that could claim their lives.

And they must do it without Clary. For Clary is playing a dangerous game utterly alone. The price of losing not just her own life, but Jace's soul. She's willing to do anything for Jace, but can she still trust him? Or is he truly lost? What price is too high to pay, even for love?

Love. Blood. Betrayal. Revenge. Darkness threatens to claim the Shadowhunters in the harrowing fifth book of the Mortal Instruments series.

I think that there is a reason why Clary won the first heroine tournament and why Jace won the first YA crush tournament. They're both reckless fighters and don't know any boundaries when it comes to keeping their loved ones safe and sound, making them happy, doing what's right. As you know, last time we heard about them, Jace was missing from the rooftop and Clary was just saved by Simon from Lilith's wrath. This book starts about two weeks after the events that took place at the end of City of Fallen Angels. The Clave cannot find any information on Jace's and Sebastian's whereabouts, therefore Clary, Simon, Isabelle and Alec decide to do a little research on their own and that's when it all begins.

Honestly, being in Clary's head kind of got on my nerves a little. I know she's in love with Jace. I know she'd do anything to save him. I know he means the world to her, but come on! I already got that this new Jace (from now on I'll just point to him as Jace 2.0) is nothing like Clary's Jace. I love Clary and her bold, loving, caring, strong, beautiful personality and that wasn't always the case here. She was a wreck. However, the title says 'city of lost souls' so I think in some ways she was lost, too. Eh, whatever, I forgive her. She's great no matter what!

Jace 2.0. I would have loved to have read something from his point of view. I was a little disappointed by that, but I guess you can't really write in someone's POV when this person is being controlled by one's evil stepbrother, can you? It is what it is. Doesn't matter whether he's posessed, controled or un-controled, I still love him.

Sebastian, I have to admit, kept me on my toes. He wasn't that interesting in the last two books, but he sure got me interested now. I didn't think there could be a worse (or should I say better) villain in this series than Valentine, but Cassie Clare suprised me by creating an even crazier villain – someone who doesn't know the difference between right and wrong, good and evil, love and lust etc and who's determined to bring the world down bith a bang.

What amazed me was how Clare has created these two boys – Jace and Sebastian – raised by the same man and they've turned out to be completely different from each other. I've read in psychology that people's personalities develop until the age of four and from then on one's personality can only be influenced, but not changed entirely. Jace knows love and that's the most important thing there is to know in this world. Even if he's sometimes lost, he knows, feels and wants to be loved. Sebastian, however, is a totally different case and even though he intrigues me, he creeps me out, too. Wouldn't want to run in with him on a dark alley, that's for sure!

As to the other characters, I loved Simon (and I don't get why I didn't love him from the very start, I was kind of annoyed with him, to be honest, but now he has become one of my favorite characters if not the most favorite), Magnus, Isabelle and Alec. I liked Jordan's and Maia's story in the previous book, but I think their POV's were just too much for me in this one. That was the thing that bothere me the most – too many POV's to keep myself emotionally invested in everyone's storylines. It was really hard to keep up.

As the heading states, this book was all about lost souls and I think that even if everyone didn't found themselves, they were pushed on the right path. Exept for Sebastian, of course. I liked this installment, I just wasn't that excited about it as I've been with the other ones in this series. I think it may be because as I said, there were too many POV's and also, I read it in bits as opposed to reading the whole book (or half of it) in one sitting. And I read a lot of snippets and spoilers from Cassie's tumblr. That was a mistake, too, I guess, since I knew some parts of it already. I think I'm not going to do that with Clockwork Princess and City of Heavenly Fire *hopes she can keep her curiosity to the minimum*. That being said, I still very much enjoyed it and I'm looking forward to reading the final book in the Mortal Instruments series. It'll be sad to say goodbye to everyone, though.

“I never cared,” he said. “I wanted you anyway. I always wanted you.”

“As far as I’m concerned, this is the worst thing that’s happened since I found out why Magnus was banned from Peru.”

Simon rolled his eyes. “It’s a good thing we know the person who’s dating Magnus Bane,” he said. “Otherwise, I get the feeling we’d all just lie around all the time wondering what the hell to do next. Or trying to raise the money to hire him by selling lemonade or something.”
Alec looked merely irritated by this comment. “The only way you could raise enough money to hire Magnus by selling lemonade is if you put meth in it.”

“You stole a boat,” she snapped. “What am I doing with you, you boat-stealing lunatic?”

"Ah," said Magnus. "Nerd love. It is a beautiful thing, while also being an object of mockery and hilarity for those of us who are more sophisticated."