Review: Broken and Screwed by Tijan 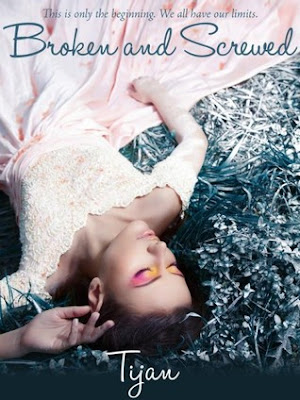 
Alexandra's older brother died the night he graduated. That day changed everything for her. No longer was she the party girl. No longer did she care about being popular and no longer was her family the happy unit she always thought existed. The only person who could help her heal is the same person who loved her brother as much as she did, his best friend. She only hopes to keep her entire heart from breaking when Jesse will move on, and she knows he will.

After Ethan died, Jesse excelled at basketball, partying, and girls. He used it all to turn his emotions off, but the irony was that Alex was the only person who could do that for him. She helped him forget, but she was the one person he shouldn't be with because the secrets he knows could shatter everything. They could shatter her.


Allrightyyyy. I didn’t know much of this book before going into it. I know I loved the sound of it when I first read the blurb and that cover is really beautiful so I thought 'why not give it a chance'. It was a hot mess, but I enjoyed it. I didn’t agree with all of these plot twists, relationships or decisions, but I did very much enjoy it indeed.

"I thought it stopped with you guys. He's going to destroy you. Don't you see that? Can't you stop it?"

Broken and Screwed (not a fan of that title) is about Alex and Jesse. And Ethan. Ethan is dead, but his presence is everywhere around the book and it all surrounds and involves him. Always him. Ethan died in a car crash and he was Alex’s brother as well as Jesse’s best friend. These two are like strangers now and they only get together when it’s a big date in relevance to Ethan – funeral, birthday – you name it. Being together eases the never-ending pain. Alex loves him, but she may as well torture herself, because it’s obvious he doesn’t feel the same.

I found Alex to be somewhat a pushover, but I can forgive her because she has lost her whole family. Her parents don’t even acknowledge her, her brother is dead, her friends are a bunch of lunatics. I know Angie was definitely a better friend than that bitch Marissa, but Angie stuck her nose in everyone’s business and that just put me off. As for Jesse, I liked him. I know it’s wrong and even though I found his and Alex’s relationship completely unhealthy, I do think he loves her. I hope he does.

It was a messed up book in the sense that I found the relationship between Alex and Jesse to be unhealthy, Alex’s friends to be selfish and her parents – I don’t even have the ability to say what they are. They’re some of the worst parents to have ever been mentioned anywhere. I’m not kidding! Even though my heart aches, I am stunned that I actually liked this book. It isn’t an international bestseller material, I think, but it was emotional and dealt with some heavy issues that are worth more exploring and I can’t wait to have my unanswered questions to be answered in August.

As for my rating, I want to give it a four, but I can’t. It was such an unhealthy relationship and the storylines were a little too all over the place. Nevertheless, I liked the pain and emotions so I’ll go with a three.