Ewert and The Two Dragons 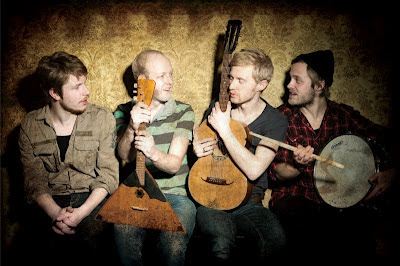 All right, so, I have a band I'd like to tell you about. Probably, if you're an Estonian, this group needs no introduction, so this post's mostly for the foreign people.

The group's from Estonia. I've liked the frontman (Ewert) for a few years now. He's had some great songs from the past and he's kind of different. As is this group he's playing with at the moment. They won almost every award possible (if not all of them) this year and one can say that like Adele is to the world, they're the same to people in Estonia at this point. They've got this cool tune and something retro, something new, something edgy and they really are different. I haven't listened to a lot of their tracks and I, as sad as I am to admit this, didn't even know very much about them until recently. They're pretty cool, so I advise you to at least check them out. Here's a song (and I believe it's their most known song) from their new album and I just hope you enjoy.
Posted by Siiri at 3:18 PM

Email ThisBlogThis!Share to TwitterShare to FacebookShare to Pinterest
Labels: music