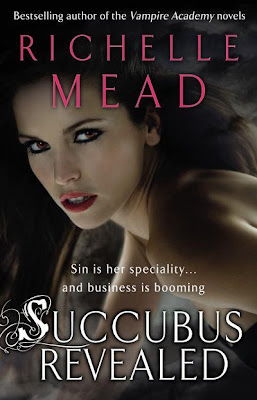 In Georgina Kincaid, succubus and she-demon, #1 New York Times bestselling author Richelle Mead has created one of her most enticing characters. But with a shot at love, and maybe even redemption, is the ultimate seductress finally going soft? Like hell she is. . .

Georgina Kincaid has had an eternity to figure out the opposite sex, but sometimes they still surprise her. Take Seth Mortensen. The man has risked his soul to become Georgina's boyfriend. Still, with Lucifer for a boss, Georgina can't just hang up her killer heels and settle down to domestic bliss. In fact, she's being forced to transfer operations. . .to Las Vegas.

The City of Sin is a dream gig for a succubus, but Georgina's allies are suspicious. Why are the powers-that-be so eager to get her away from Seattle—and from Seth? Georgina is one of Hell's most valuable assets, but if there's any way out of the succubus business she plans to take it—no matter how much roadkill she leaves behind. She just hopes the casualties won't include the one man she's risking everything for. . .


I think I’m not going to write about all of the books from this series separately, I’m just going to state all the things here. I liked the beginning of the series. The sequel was good. Loved the third and the fourth book. The fifth was not that good, it did not move me at all on any level and I wasn’t sure I wanted to read the last one. I’m glad I did, tho.

The sixth book was different from the others. I thought that, throughout the series, the flow of the story was quite easy to figure out, but I was not expecting the things happening in the last book. At all. It was understandable and reasonable, because I could not figure out the connection between the men from Georgina’s past. I liked the conclusion and, although I feel like Mead could have told the story bettew, all the loose ends were connected and the ending was quite logical. In the last one, there was not that much action, but it was still cool.

At times, I feel bad about reading all the books from the series right away, because in the next one the author always describes what happend in the previous one. It’s annoying to read it all over again. But, if I’d have to wait for the next book to come out for a year or so, I’d forget the details, too, so maybe it’s not so bad.

In conculsion, it was an interesting series and I enjoyed Georgina’s relationship with her friends (Hugh, Peter, Cody) and Carter the most. Real friends are there even when their own perspective is not the greatest and one does not always have to fight on the same side to be there for someone. Even Bastian’s and Georgina’s sister-brother relationship was sweet and sincire.

I started to look for excerpts, actually, but there were too, too many of them, so, yeah. There were so many good thoughts, sayings and scenes that made me laugh. There were a few, tho, which made me laugh out loud, but in each of these books there was an aphorism, which one should keep in mind. Unfortunately there were too many of them and I could not choose a few of them to write here.

Rate to the last book and to the series in whole: 4.