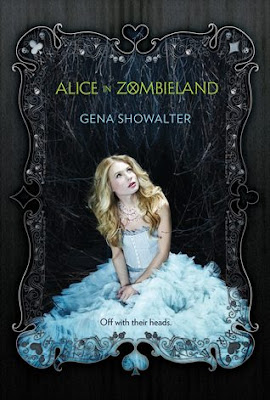 
She won’t rest until she’s sent every walking corpse back to its grave. Forever.

Had anyone told Alice Bell that her entire life would change course between one heartbeat and the next, she would have laughed. From blissful to tragic, innocent to ruined? Please. But that’s all it took. One heartbeat. A blink, a breath, a second, and everything she knew and loved was gone.

Her father was right. The monsters are real….

To avenge her family, Ali must learn to fight the undead. To survive, she must learn to trust the baddest of the bad boys, Cole Holland. But Cole has secrets of his own, and if Ali isn’t careful, those secrets might just prove to be more dangerous than the zombies….

I’m a huge fan of fairy tales and different myths. It doesn’t even really matter if it’s an original story or a retelling – I love ‘em all! This book’s name Alice in Zombieland definitely hints on a retelling of Alice in Wonderland where the main character's name is Alice and there are some things about rabbits mentioned here and there, but mostly it’s an original story all on itself. This was my first zombie read and in a weird kind of a way I sort of liked it.

They were staring at me, their lips peeled back from their teeth—their very sharp teeth.
Her dress was ripped, dirty, her eyes sunken. Her skin was pitted, with patches of something black oozing from her pores. There wasn’t a veil on her head, but there was hardly any hair, either, just long stringy strands with leaves tangled throughout.

Zombies. First of all, yes, they weren’t exactly what I was imagining when I first started this book, but it was actually a very interesting take on them. They aren’t your typical apocalypse/virus/living dead creatures (I haven’t read a zombie book before, but unfortunately I’ve seen Dawn of the Dead and it’s freaking creepy; laughable, but creepy).  Zombies in this book are more of a mix between zombies and ghosts. I think I liked this combo. And, it’s not that weird.. I mean.. Some people like fries with ice cream. Well.. My best friend does, so no judging on my part!

Plot. It was pretty fast-paced, packed with lots of action and spiced up with witty dialogue. I found the fighting scenes enjoyable and there were quite a few surprises on the road for Alice and her friends. There were some parts that were a bit slow for me or not so believable and some of it was pretty predictable, but overall, I thought it was compelling and I was eager to find out more. The most interesting part for me was the journal Alice was reading. I want to learn about its previous owner and discover the secrets hidden behind the code.

Characters. They were ALL relatable and, whether it was love or hate between them, had great chemistry. Yes, I liked Cole and Alice, but they weren’t my favorite characters. Who were? Well.. I can tell you that I absolutely fell in love with Frosty and Kat. I found their relationship a bit tiring, but I’m a huge fan of both of these characters individually and together. If I got to hang out with two people from this book, I would choose them. I just want to squeeze these two in a hug, ha. They’re hilarious and never a dull moment when they’re around!

“You weren’t lying when you said everyone’s afraid of you,” I remarked.
“I know, and that’s the way I like it. No one asks me any questions about what I’m up to, they just expect the worst and keep their distance. You should take a lesson.”
“Ha! I’m not afraid of you, and I never will be.” I wouldn’t mention the times I had, in fact, been afraid of him.
“So you keep saying. But I’ll keep trying to change your mind.”
Cole held the door open for me, and I swept inside the house, purring, “With your lethal manners? Good luck.”
“Funny.”

Overall, yeah, there is some room for improvement, but I quite enjoyed it. Did I cry a single tear? No. Did I LOL? Umm.. Yeah!! This was my first zombie book and even though this wasn’t a traditional take on zombies, these deadly creatures kind of fascinate me. I’ll definitely read the sequel next year and I can’t wait to find out where Showalter is taking these lovable characters on their journeys.