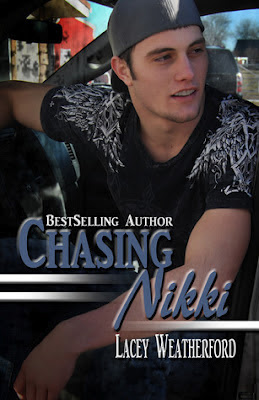 
Chase Walker used to be a good kid—charming, athletic, and with a bright future ahead, but that was before travesty struck his life, sinking him into deep despair. Caught up in a world of drugs and alcohol, he doesn’t notice time slipping away until he’s arrested for underage drinking one night.

Fed up with watching her son destroy his life, Chase’s mom relocates him to live in a small ranching community with his ex-military grandfather. Chase is far from happy about the situation until he meets, Nikki, the cute cheerleader who won’t give football players like him the time of day.

Chase enjoys a good challenge though and sets out to claim Nikki for his own. He soon discovers she’s more than a pretty face—she’s a balm to his troubled spirit also. But when tragedy strikes Nikki’s life too, suddenly Chase finds himself put to the ultimate test. Can he trust Nikki, and all that she’s taught him? Will it be enough?


Chasing Nikki is a beautiful story about a girl and a boy. Let me shorten the book for you, if I may: boy falls in love and chases after the girl while she stands on her ground, puts the boy through a test, which the boy does pass. Then the girl gives him a chance and they live happily ever after. Wait, rewind that last part!!! They do live happily ever after, don’t they?

“It’s just a date. One date. If you like it we’ll have more, if you don’t, we won’t. I just want you to give me a chance before you decide I’m not worth it.”

I feel like I can't tell you anything other than I really enjoyed this book. Even though at the very, very beginning Chase wasn't someone I liked, he grew on me immediately and I absolutely fell in love with his character. He has an addiction and he doesn't admit to it. He knows he has a problem, but saying it out loud kind of makes it more real, you know? He grieves the loss of his father who has just recently passed away and Chase doesn't want to deal with the pain that’s left him hollow. He's spiraling down in this endless circle and his downfall is stopped by one girl. Enter: Nikki.

Nikki was great! She is a cheerleader and I know that you have to judge people by their own behavior and personal traits, but you can’t help but be judgmental since cheerleaders are usually portrayed as not the brightest, but definitely some the meanest teens in high school. Nikki is anything but that and I love a girl who stands by her decisions and doesn't let sweet words shatter her defences, which she's worked so hard to build up, as soon as they come out from a cute boy's mouth. Nikki is definitely something different for Chase and he works hard to meet her approval. Somehow during this he finds himself on a crossroad: a man he wants to be and the man who he thinks he is.

Chase tries to do everything in his power to make this girl happy. He does. They're absolutely perfect for each other. I loved them. I fell in love with them. They'd make a great couple in real life, that’s for sure. So, everything's all sunshine and rainbows until one night changes it all. It's the worst thing that could possibly happen and it puts everything to a test. Everything! Their lives come crashing down and it shows you that it’s moments like this when you discover things about yourself, things you couldn't possibly find out otherwise. It's completely devastating and I tell you what, I cried through the whole final third of the book. I liked how it ended, although I was furious. I was completely irritated, sad, miserable and I wanted to.. Ugh.. I just wanted to strangle this book so bad.

“So stop looking at the past and all the things you can’t change. They’re done and over with. Now is the time for you to look to the future, grasp it by the hand, and decide where you want to go. I told you once before, and I’ll say it again—this is your life, Chase. Only you can decide what it’s going to be like. Don’t let outside forces dictate it for you.”

But then.. When I thought about it afterwards, I found it beautiful. No matter how devastated I felt, no matter how things were left for these two, it was beautiful. Pff.. Even now I'm getting teary-eyed. I read this book a few months ago and writing this review and thinking back at it still gets me emotional. It was that good. So, without further ado, I can tell you that I wholeheartedly recommend this book. It was as beautiful and bright as it was devastating and horrible. The only reason I want to give this book a 4.5 not a 5 star rating is the diary scene towards the end which I felt could have been done differently (if you get that far, you’ll know what I mean), but because it was such a minor thing, I'm still giving it 5 stars since it was one heck of an emotional rollercoaster. I want that next book so bad, my heart bleeds and I need it fixed. Please, dear December, come faster!