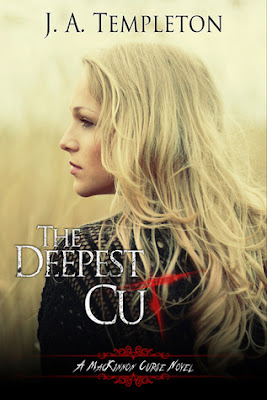 Sixteen-year-old Riley Williams has been able to see ghosts since the car crash that took her mother’s life and shattered her family. Guilt-ridden over the belief that she’s somehow responsible for her mom’s death, Riley is desperate to see her mother’s elusive spirit to gain her forgiveness.

When her father moves the family to Scotland so they can all start over, Riley believes her life couldn’t get worse––that is until the ghost of nineteen-year-old Ian MacKinnon catches her purposely cutting herself. An uneasy truce quickly turns into friendship, and soon Riley’s falling hard for Ian.

Riley believes her gift could help Ian end the curse that has kept him tied to the land for centuries, but that would mean letting him go forever and she’s not sure she is strong enough to do that. As if her life wasn’t complicated enough, the spirit of the woman who killed Ian returns and she’ll stop at nothing to keep Riley from helping Ian find eternal peace.

This book has been on my TBR pile f-o-r-e-v-e-r. FOREVER! When it was chosen as a group read in one of the groups I’ve joined on Goodreads, I jumped on that train immediately. Also, it didn’t hurt that the book was free on Amazon. It has a really pretty cover and the synopsis sounds pretty great so it was bound to be an awesome read, right? Unfortunately, no.

"If he only knew how little I cared about living."

The story. The Deepest Cut follows the life of Riley who has recently lost her Mother in a car accident she feels like was her fault. She is a cutter. Oh, and among other things, she sees ghost. Yup, you heard me! Riley moves to Scotland with her Dad and her brother Shane. There she meets Ian – a ghost who has been trapped on Earth for centuries by a curse. While falling in love with a ghost, Riley has to deal with his killer and a new environment, a pot-head brother and new friends.

My thoughts. The story itself was good, but the writing was so all over the place for me and really, really jumpy from scene to scene. I like my writing smooth and flowing and even though sometimes I can overlook it, it didn’t quite work for me in this case. Moreover, I wasn’t emotionally invested unless it was about Shane and Riley. Their brother-sister relationship was what kept me reading the story rather than the ghost storylines.

The ending was good which makes me want to read the next one, but I won’t be doing that. Not for any time soon, that's for sure. I know a numerous part of the readers felt the creepiness factor, but it didn’t feel creepy for me at all. I’m not hard to scare so I think it speaks volume for that matter. In a way I’m glad I wasn’t frightened though – I’m a huge coward when it comes to horror stuff lol. If it’s still free on Amazon, give it a try – you may enjoy it. If it’s not, I say don’t waste your time.