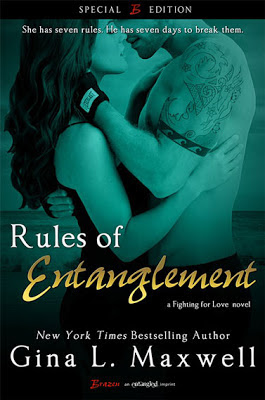 Seven days. And seven rules to break...
District Attorney Vanessa McGregor firmly believes that structure and order are the stuff that dreams are made of. Happiness can be planned - and it starts with seven rules she's laid out for her future. But as she's organizing her best friend's wedding in Hawaii, all of Vanessa's best-laid plans are about to meet their match in a wickedly hot MMA fighter...
Jackson "Jax" Maris is focused on surfing, training and fighting. That is, until he opens up his big mouth, and finds himself having to pretend he's engaged to his little sister's best friend, Vanessa. When they're force to share a romantic bungalow, however, their little charade suddenly takes a turn for the seriously sexy. And while Jax is definitely not part of Vanessa's long-term plan, he has seven days - and seven naughty nights - to turn her seven-rule plan upside down

Entangled’s Brazen imprint is known for its books filled with sizzling chemistry, drool-worthy male characters and sexual tension. I have enjoyed most of the ones I’ve read. They’re easy to follow, fun and short. Most importantly, they’re companion novels so you don’t have to read the whole series to follow the storylines. When I saw Rules of Entanglement’s synopsis, I was sure it was bound to be a fun ride.


“Never date a man who can’t out-drink you in tequila.”

The story. We have Vanessa, an attorney, and Jackson, a surfer and an MMA fighter, as the main couple or rather fake fiancées. Vanessa’s best friend, who among other things is Jackson’s sister, is marrying Jackson’s best friend Reid. Vanessa and Jax pretend to be engaged so they can arrange their friends’ wedding. Jax is intrigued by Vanessa and makes a promise to himself to break down Vanessa’s walls and make her break her seven rules.

My thoughts. I read it mostly when I was taking a bus to home-university-home and most of the time I must have looked like a lunatic for trying not to smile. I’m a rule follower by nature (come on, Virgo alert here!) and it was fun to see Jax break Vanessa’s walls and rules down like it was something he does for a living.  Jax was such a fun character to read about and boy did these two have hot chemistry and tons of tension. The only thing I didn't enjoy was that the um.. love blossomed in a really short time. It wasn't forced though and took lots of doubting and decision-making in order to make it work between these two.

I’d recommend this story to every Brazen fan as well as readers who enjoy great chemistry and fun plots in addition to exotic destinations. I WANT TO GO TO HAWAII NOW!!! Oh and body shots have never sounded so good, trust me! I think it was the best I've read from this Entangled’ imprint and I thoroughly enjoyed this sizzling book.