Review: Shatter Me by Tahereh Mafi 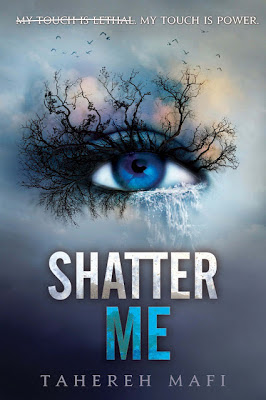 
Juliette hasn’t touched anyone in exactly 264 days.
The last time she did, it was an accident, but The Reestablishment locked her up for murder. No one knows why Juliette’s touch is fatal. As long as she doesn’t hurt anyone else, no one really cares. The world is too busy crumbling to pieces to pay attention to a 17-year-old girl. Diseases are destroying the population, food is hard to find, birds don’t fly anymore, and the clouds are the wrong color.
The Reestablishment said their way was the only way to fix things, so they threw Juliette in a cell. Now so many people are dead that the survivors are whispering war – and The Reestablishment has changed its mind. Maybe Juliette is more than a tortured soul stuffed into a poisonous body. Maybe she’s exactly what they need right now.
Juliette has to make a choice: Be a weapon. Or be a warrior.

Could everyone who hasn’t heard of this book please raise a hand? Yeah.. That’s what I thought. This series is very talked about and the new cover art definitely allures (most of) us to experience it ourselves. I had put off reading Shatter Me long enough so I finally caved in and finished it within two nights.

“I hope it’s not too late to fight back”

The story. Shatter Me introduces us to a world where environment has been ruined by its inhabitants. This kinda hits close to home since I do agree that we should treat our planet more carefully but since it’s not an environment protection essay, I’ll leave it at that. Juliette is our girl and she is locked up in a pretty freaky institution. Why, you ask? She killed someone with her bare hands just by merely touching one. She’s been alone, silent with her thoughts for 246 days until now – the day she gets a cellmate.

My thoughts. Of course I had heard of the unique writing style. It was hard to adjust to it and it was probably the reason I didn’t connect to Juliette that much, although I must admit, the writing style at the beginning of the book is genius. The more the book progressed, the more usual the writing became and mostly because of the changes inside Juliette. I liked how she opened up and what part Adam played in it. #TeamAdam. Oh, by the way, Kenji? He was introduced in the last third of the book but he became my favorite character nonetheless.

At first I didn’t mind the lack of information about the society and how it came to be. Come on! It’s been so talked about – we’re destroying Earth yada yada yada. What more is there to add as an author? The lack of action didn’t bother me either at first since the writing was so unique and took me by surprise. However, now, 2 days after finishing it, I realize that not much happened action wise nor in general. Yes, we have our villain, our hero, our strong heroine, escaping, romance, fighting back etc. It’s nothing I haven’t seen though.

To sum up my review, I’d say that the covers are gorgeous (sorry, I couldn’t not mention it ;)), the synopsis was great, the feedback from fans is awesome, the writing is unique, Tahereh herself is out of this world hilarious but but but there was just something missing for me. It’s such a shame. I really wanted to love, adore and pet this book, unfortunately it didn’t satisfy my needs enough. I'll still pick up the sequel even though I'm terrified of that inevitable and silly love triangle. (Oh, boy...)