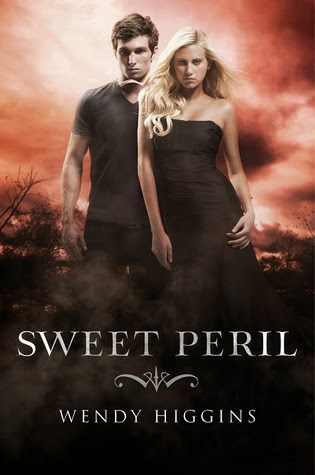 Haunted by demon whisperers, Anna does whatever she can to survive, even if it means embracing her dark side and earning an unwanted reputation as her school’s party girl. Her life has never looked more bleak. And all the while there’s Kaidan Rowe, son of the Duke of Lust, plaguing her heart and mind.
When an unexpected lost message from the angels surfaces, Anna finds herself traveling the globe with Kopano, son of Wrath, in an attempt to gain support of fellow Nephilim and give them hope for the first time. It soon becomes clear that whatever freedoms Anna and the rest of the Neph are hoping to win will not be gained without a fight. Until then, Anna and Kaidan must put aside the issues between them, overcome the steamiest of temptations yet, and face the ultimate question: is loving someone worth risking their life?


Buddy-read this gorgous thing with Rashika and had so much fun discussing it. Sweet Evil was one of the first YA books that I just about died while reading, because I was too busy swooning over the love interest. Yes, I’m fully team Kaidan and proud of it! While I adore Wendy Higgins to pieces, loved the first book a lot and know that the fans were satisfied with Peril, I was hesitant. Why? Well, I knew that Kai wouldn’t be in the first half that much, so I honestly didn’t know if Anna and her own adventures would be captivating enough to keep me hooked. Were they?


“We had a secret knowledge that demons couldn't fathom. They saw love as a weakness, but they were wrong. Love would keep us going, love was our strength.”

I really think they were. Yes, I had a tough time with Anna at first simply because.. Well, I know, as a reader, that Kai and Anna are meant to be. They are and will be the endgame no matter what kind of obstacles they have to endure and surpass. However, watching a girl pine for a guy like that IRL would be devastating and my rational side says “Get over him, Anna, and start living your life! Do not chase a guy who doesn’t want to be chased.” So as much as it pains me to say this, Anna can be a touch annoying. At the end of the day (especially during chapters 14-19), I’m glad she fought for what her heart wanted the most.

This book is more about the character growth than world building. If you’re looking for excessive world building, you’re looking at the wrong place. It’s not necessarily a bad thing though: we meet new Nephilim kids, get more proof of how malicious and evil some of the Dukes are, all relationships are developed and given more depth to, you even may start liking some characters *ahem* Ginger *cough*. The pacing is pretty fast and what I like about Wendy’s writing is that she doesn’t take time with overly long descriptions of Anna’s day and whatnot. She knows we want to see the real action, so it was nice to see Anna, step by step, becoming closer to fulfilling the prophecy.

Moreover, kudos to Wendy for not giving us an excessive love triangle. Yeah, there is a moment where you probably think that “yikes, will it really turn into one?”, but nope! Anna is confident in her choice and I very much appreciated it. Aaaalso, this book is way steamier than Sweet Evil was. So. Much. Swoon. You, guys! SUCH SWOON, SRSLY! I felt like we were rewarded with so much goodness after all that waiting, almost-moments, back & forth? It was sweeeet. (Pun intended.) There were some really sweet father-daughter moments here and there. Ohhh, and the Blake & Kai bromance? I SHIP IT SO HARD.

As a whole, I wished that there was a little more world building, but we got some great revelations. I’m happy with the way things wrapped up and even more excited for the finale. Sweet Peril is all about the character growth; much more steamy and full of I-need-to-fan-myself moments. Kai and Anna fans will be very, very pleased with this novel :)