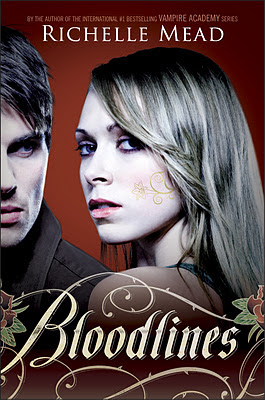 Blood doesn't lie...
Sydney is an alchemist, one of a group of humans who dabble in magic and serve to bridge the worlds of human and vampires. They protect vampire secrets - and human lives. When Sydney is torn from her bed in the middle of the night, at first she thinks she's still being punished for her complicated alliance with dhampir Rose Hathaway. But what unfolds is far worse. Jill Dragomir - the sister of Moroi Queen Lissa Dragomir - is in mortal danger, and the Moroi must send her into hiding. To avoid a civil war, Sydney is called upon to act as Jill's guardian and protector, posing as her roommate in the last place anyone would think to look for vampire royalty - a human boarding school in Palm Springs, California. But instead of finding safety at Amberwood Prep, Sydney discovers the drama is only just beginning...

I’ve read all of the books from „Vampire Academy“ series and it’s my #1 book when it comes to vampire stories. Interesting plotlines, complicated and layerd characters, happiness, sadness, suffering . Richelle is an amazing writer: flowing, easy style, which encourages her young readers to pick up the next book. Rose, who is the narrator in VA, is my favorite heroine next to Katniss Everdeen. She’s strong, independent, stubborn, sometimes overdaring, at times vulnerable, also, loving, caring and her heart is in the right place. Rose Hathaway does everything she possibly can to make people she cares about happy, protects them, whatever it takes, even if it means giving up her own happiness. After Rose’s story it was hard to get used to the narrator, Sydney, in „Bloodlines“, where a lot of the characters are familiar to the readers from VA books, because she’s kind of stoic and does not open up to a lot of people. She never breaks the rules. At times, Sydney seems emotionless and cold. As the story progresses, she opens herself, of course, and grows as a person. Although Sydney is eager to learn, smart, loves books (and history), it was hard for me to connect with her or feel for her. Maybe it’s because it’s all about alchemists in „Bloodlines“ (and, of course, vampires, too) and they did not interest me at all in the VA books.
In „Bloodlines“ we meet some new characters and get to know some of the old ones form „Vampire Academy“ , such as Eddie, Jill and Adrian, who, by the way, is one of my favorite characters form the VA series. His one-liners are hilarious and sarcastic. He is not afraid to be himself and to express himself, his pain, caused by Rose, is heartbreaking. I liked Adrian's lost chapter even more than the „Bloodlines“ itself, to be honest. During the novel one can get to know him a little better and maybe understands him now. One can see how his growth and progression. The love stories in „Bloodlines“ feel  kind of forced to me.
I’ve never actually been that interested in Eddie’s storylines, I’ve considered him a good friend (I’d very much like to have him as a friend) and he’s a loyal, good person, but he hasn’t won my attention so far. I’ve grown to like him. I’m keeping my fingers crossed that everything turns out well for him. I’ve never been impressed by neither Jill or Sydney, so I’m hope, I’ll grow to love them too.
The plotline itself is quite interesting and exciting. One does not know who to trust, who to suspect. I mean, I suspected about three-four charcters, and one of them actually turned out to be the villain, but not for the reasons I expected. However , I understood what was going on before Sydney did. I was pleasently suprised about Sydney’s resistance and fighting spirit, but I realized I missed Rose even more than I thought I did.
I wasn’t sure I wanted to read the sequel, because although it was a decent story, I could not connect to it and I did not find any reasons, besides Eddie and Adrian, to continue. At least, that’s what I tought. Until the very last sentence of the book. Oh, my!! I literally stood my mouth opened until I felt the corners of my mouth quirking up and I just could not stop smiling for the next five minutes. „Golden Lily“ – it better be, thanks to the ending of „Bloodlines“, exciting, funny, intense, with unexpected plotlines, rivalry. I’d really like Richelle Mead to bring back Christian Ozera for a change, he’s my favorite character from the VA series, but it seems unlikely at the moment. One can only hope. For now, I’m pleased with Adrian, Eddie and ... ;).
I still Richelle’s writing style and I’m pretty satisfied with some new obstacles our beloved characters must surpass and I’m definitely going to read the sequel „Golden Lily“, and we’ll see, if I pick up the third one, too. It was a descent start to the series. Oh, and why 2,5 then? Because I did not connect with Sydney, but all the other elements were great and I cannot claim that I did not like „Bloodlines“, it’s just that I didn’t like the narrator as much as I did in the VA. That’s why it’s just 2,5, otherwise it would have been a 3.

Hate the trailer, by the way. But it is what it is.