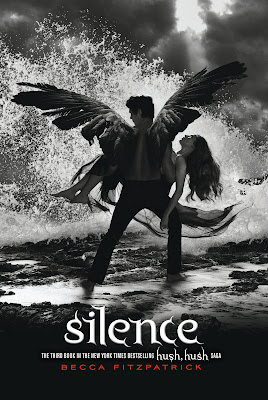 The noise between Patch and Nora is gone. They've overcome the secrets riddled in Patch's dark past...bridged two irreconcilable worlds...faced heart-wrenching tests of betrayal, loyalty and trust...and all for a love that will transcend the boundary between heaven and earth. Armed with nothing but their absolute faith in one another, Patch and Nora enter a desperate fight to stop a villain who holds the power to shatter everything they've worked for—and their love—forever.

I read „Silence“ in English. I’m looking forward to reading the last part of it, because the more I read, the better it gets. I thought that the third book was so far the best out of the three as it contained more excitment, love, action, depth than the two previous ones. Loved it! The first one was too superficial and kind of a cliché. The second book introduced a different side of the characters, but concentrated too little on the main characters and I was bothered by the reckless behaviour of Nora. In the third book the line between good and bad are more cloudy than ever before and all of the characters grope in the dark throughout the book. I liked that Fitzpatrick focused on telling the story of Patch and Nora, because that’s what this series is all about. I feel like there was something missing when it comes to the second book. Nora tried to be independent, but couldn’t cope with it very well. Patch, a lot of the times, was nowhere in sight and a big part of the storyline took place near Nora and some of the other characters. In the second book you could read about teenage problems and see how they’re trying to manage the hormones inside them, as well as, the problems in everyday-life, they had to cope with supernatural threats and dangers. The enemy was well-written. I even liked Scott. It was interesting to read about Nora, while she didn’t remember a thing of the past 6 weeks, and it was fun to see how she and Patch became closer and closer by every minute they spent together. Oh, and the funny thing is, it was like meeting Patch for the very first time, because she didn’t remember him at all. A dialog I loved the most between them was when he sneaked into the dressingroom and she tried some homecoming dresses on. He found out that she was taking Scott to the homecoming and he wasn’t particularly happy about it. I have a good imagination and while reading, I can imagine almost everything happening in my head and Patch’s reaction in this scene just made me laugh. I’ll add a little paragraph from this scene down below to the characters section. I was pleasently suprised by the ending of this novel, because when the line between good and bad was clouded in this one, then in the last book, there is no line between those qualities. I read that not only will Nora be in danger in the last book, but Patch will have a fight on his own (an enemy form the past). I bet this will create some fascinating and intriguing situations, because usually Patch, the fallen angel who readers love so much, is the one, who’s saving his girlfriend from trouble, but different plotlines can be expected now. I’m definitely looking forward to fall 2012, when the fourth and, also, the last book is published.

Liked:
Patch. I feel like a fangirl, because in every review Patch’s in this particular category. Oh well! It was about damn time he started to fight for what he wanted and loved. Maybe the only thing that really bothers me is that he has this weird thing that he treats Nora like property sometimes (as in: you’re mine, Angel etc). While reading, I feel like he’s a stronger character mentally (and physically) than Nora and, therefore, can carry more weight on his shoulders when it comes to the action and plotlines in this story. Also, his one-liners (similar to Adrian Ivashkov) make me laugh again and again and the series wouldn’t be half as good without them.

He inclined his head at my dress. „What’s the occasion?“
„Homecoming,“ I said, twirling. „Like?“
„Last I heard, homecoming requires a date.“
„About that,“ I hedged. „I’m sort of going with Scott. We both figure a high-school dance is the last place Hank will be patrolling.“
Patch Smiled, but it was tight. „I take that back. If Hank wants to shoot Scott, he has my blessing.“

Nora. I really started to like her in the third novel. She wasn’t this teenage girl, who lets others walk all over her, anymore and she managed to handle things in a grown-up way. Nora took her „game“ to a whole another level and I felt sorry for her, because she has to suffer badly due to things she has never wished for and couldn’t care less about. If she was in the shoes of a child in the second book, then now she’s switched them to bigger ones and suddenly changed form a confused teenage girl to a young women in control.
Hank. I like complicated and problematic villians and the villians in this series have usually been like this. They’ve all needed something thee cannot live without or can’t go on living the way they’ve liver so far. They’ve all lived more than a one lifetime (mostly) and almost everyone of them have been supernatural creatures (I feels weird to caal a nephilim or a fallen angel human, so yeah, creatures). I like Klaus from a TV-show „The Vampire Diaries“. He’s one of the worst enemies one’d ever wish to have and he’s always two steps ahead of his antagonists. He doesn’t understand jokes made on him and his biggest weakness is his humanity. It makes him vulnerable and takes the stakes on another level, it brings excitement. I thought that Hank lacked of humanity, but at the same time, every line which included him was interesting to read. I just wish the author would have portrayed him with a little more humanity and just as a selfish bastard.

Didn’t like:
Blythe. Nora’s mom really got on my nerves. I get that parents want to protect their children, but in this case the parent was complitely blind and stupid. Okay, it was possible to affect her (by nephilim, who lived in their home) and it wasn’t just a possibility, it happend many times, but isn’t the love of a mother supposed to be like the most powerful thing in the world? Therefore, I’d have liked to see the author portray her as a little more suspicious (not suspicious of Nora, but suspicious of the nephilim, who comfortably lived under their roof), instead of being blind and not the brightest tool in the shed.