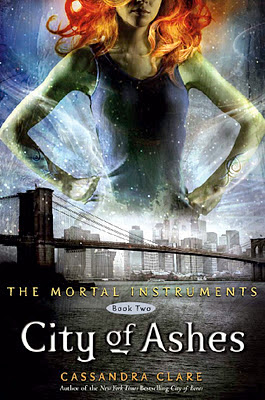 Clary Fray just wishes that her life would go back to normal. But what's normal when you're a demon-slaying Shadowhunter, your mother is in a magically induced coma, and you can suddenly see Downworlders like werewolves, vampires, and faeries? If Clary left the world of the Shadowhunters behind, it would mean more time with her best friend, Simon, who's becoming more than a friend. But the Shadowhunting world isn't ready to let her go — especially her handsome, infuriating, newfound brother, Jace. And Clary's only chance to help her mother is to track down rogue Shadowhunter Valentine, who is probably insane, certainly evil — and also her father.

To complicate matters, someone in New York City is murdering Downworlder children. Is Valentine behind the killings — and if he is, what is he trying to do? When the second of the Mortal Instruments, the Soul-Sword, is stolen, the terrifying Inquisitor arrives to investigate and zooms right in on Jace. How can Clary stop Valentine if Jace is willing to betray everything he believes in to help their father?

When I think about what happened in the secon book of the Mortal Instrument series, I remember only a few scenes, plotlines:
Nothing else really comes to mind. At the same time, I remember details from the first one, so maybe CoA was not that memorable.
New characteres were introduced, Maia, e.g. One word: annoying! I lookd forward to reading more about the main characters and Maia got too much attention from the author, but I guess in some ways she’s an importat character and as the series progress, she has her own shiny moments. Maybe I wasn’t such a fan, because I was afraid she’d get in the way between Clary’s and Simons friendship, but of course, that would never happen. There’s noone more important than Clarissa to Simon.
Valentine. Bad ass villain! Well, he’s got good motives, but he’s blinded by power and greediness and won’t stop at nothing. He turns people against each other, enjoys their suffers. Selfish. I got to know him during the third book and, at some point, even felt for him a little, but while reading the second one, I was amazed by his cruelty. He destroyed lives, relationships, caused mental scars, which cannot be cured.
Magnus. Brightest star of the series. He’s not the frontline character, but he’s important. Magnus’s probably my favorite character from TMI and TID.
Frankly, I’m glad that Clare has the courage to discuss about gays, especially in young-adult fiction, because it’s kind of a taboo in youth literature. Malec has thousands of fans and I’m definitely one of them.
Cassie Clare has written a scene from Jace’s POV, again. This time it’s the scene from the Seelie Court.
Some excerpts then:

"Well, I’m not kissing the mundane,“ said Jace.
"I’d rather stay down here and rot.“
"Forever?“ said Simon. "Forever’s an awfully long time.“
Jace raised his eyebrows. "I knew it,“ he said. "You want to kiss me, don’t you?“