Okay, so here’s my first review of a book (or more like a review about a series, because after this one I'll post reviews about the sequals). So.. I found this book „Hush Hush“ and it’s written by B. Fitzpatrick. It’s mostly about a girl Nora Grey (the narrative) and her life changes after meeting with a mysterious guy named Patch, who has his own agenda for communicating with Nora. Btw, I’m trying not to spoil anything so please don’t be mad about the few details. Anyway, it’s my very first review, therefore, I hope no one’s furious about this and I promise, it’ll all get better in time.

There are 4 books in this series: 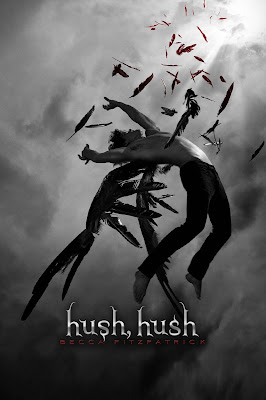 For Nora Grey, romance was not part of the plan. She's never been particularly attracted to the boys at her school, no matter how much her best friend, Vee, pushes them at her. Not until Patch came along. With his easy smile and eyes that seem to see inside her, Nora is drawn to him against her better judgment.
But after a series of terrifying encounters, Nora's not sure who to trust. Patch seems to be everywhere she is, and to know more about her than her closest friends. She can't decide whether she should fall into his arms or run and hide. And when she tries to seek some answers, she finds herself near a truth that is way more unsettling than anything Patch makes her feel.
For Nora is right in the middle of an ancient battle between the immortal and those that have fallen - and, when it comes to choosing sides, the wrong choice will cost her life.

Sounds cheesy? Yeah, for sure. This book was captivating and hard to put down, but it felt kind of like a clishé. A Girl, troubled (handsome and dangerous) guy, forbidden love, mystery – sounds familiar. Compared to an ordinary love story the difference between these two is the story of angels and this fantasy world, which ordinary people have no clue about, including the narrator. I enjoy reading fantasy novels, but I don’t mind reading some classic authors e.g. Remarque, Austen etc. What bothered me in this novel was the name of the narrator. Nora? Why the hell this name? It was hard to get use to and so far I haven’t managed to get use to it (and by the way, I’ve read 3/4 already).
I’m well aware of the fact that many readers like when author describes the personality of one’s characters and doesn’t hold back by doing it. I like it too. I was pretty dissapointed about one thing: the lack of description when it comes to appearances. While reading, I always imagine everything. It’s like I’m watching a movie. So it’s hard to imagine if you don’t know what to imagine. I enjoyed that it was a fast-pace book but what bothered me was that the author lacked depth when speaking about the personalities of the characters, but I guess that it’s an overall problem when it comes to series: the first book is just an itroduction and the real action begins in the sequals.

Characters:
Liked:
Patch. A character with many layers. I guess his appearance is in harmony with his personality, but I kind of feel like there are many sides of him, which the reader isn't aware of yet. I am definitely looking forward to get to know more about his past. He's kind of an ultimate bad boy and tho I usually like "my bad boys" (e.g. Adrian from Vampire Academy series) with some goodness and humanity inside of them, I enjoyed this character a lot. I thought he walked on a thin line between insults and sarcastic jokes, but he managed to just be sarcastic and funny. He definitely kept me on my toes.

Didn’t like:
Elliot. The most awful character troughout the whole book and not because of his motives and actions. I dind’t think for a second he was „good“. He was unctuous and I had no sympathy for him. Actually, I didn’t have any emotions for him, he just wasted precious pages. I felt pity for Jules at the end of the book, but none for Elliot.
Marcie. Pointless, arrogant, spoiled brat.