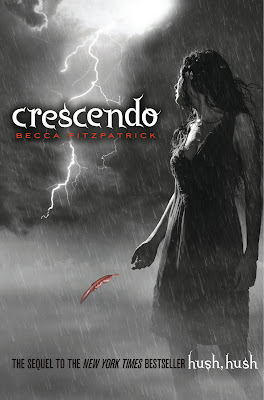 Nora should have known her life was far from perfect. Despite starting a relationship with her guardian angel, Patch (who, title aside, can be described as anything but angelic), and surviving an attempt on her life, things are not looking up. Patch is starting to pull away and Nora can't figure out if it's for her best interest or if his interest has shifted to her arch-enemy, Marcie Millar. Not to mention that Nora is haunted by images of her father and she becomes obsessed with finding out what really happened to him that night he left for Portland and never came home.
The further Nora delves into the mystery of her father's death, the more she comes to question if her Nephilim bloodline has something to do with it as well as why she seems to be in danger more than the average girl. Since Patch isn't answering her questions and seems to be standing in her way, she has to start finding the answers on her own. Relying too heavily on the fact that she has a guardian angel puts Nora at risk again and again. But can she really count on Patch or is he hiding secrets darker than she can even imagine?

I personally liked the sequal more than the first book. Liked that the author was brave enough to tear Patch and Nore apart already in the second book. In „Crescendo“ I feel like I understand the characters a lot more now and I geet what they’ve been trough. Nora (this name reminds me of the main character from Ibsen's "Dollhouse" and she is a total opposite of the narrator in "Hush Hush".. she's not a push-over..) missed her dad really bad so I enjoyed her reaction when she thought she saw her dad, this part was written pretty well and it made me compassionate towards her. I smiled a few times while reading „Hush Hush“, in this book I laughed out loud. More than couple of times. Vee’s character was much more interesting in this novel, much more likeable. I quite enjoy the fact that Vee and Nora are not quite the same: they’re like opposites of one person, e.g. Vee is reckless, acts on her emotions and just says everything she thinks out loud. She’s just fun to hang out with. Nora, on the other hand, is more calculated, she usually thinks before she acts and she doesn’t trust everyone like Vee does. She likes to study and read books, while Vee likes to go out and just have a good time. I can relate to Nora more than to Vee, but I like having people like Vee around, they make everything look brighter and enjoyable. What bothered me about the plot was that the author brought too many new characters and consentrated on telling their stories, while not consentratig enough on the original ones. I didn’t see the conneection between Nora and Marcie coming, but I knew halfway trough the book who was after Nora, I just wasn’t shore what the motive behind it was. Overall, I liked it, relationships between the characters weren’t just superficial, they got more and more complicated. The overall-rating is 3.5, because I thought that the main character was a bit childish and reckless, which is a far cry from her personality and therefore, I didn't understand some of her actions. This book was too childish at times (and I don't mean 12-year-old children, moor like 16-year-old teens), but the author brought in some elements from criminal novels and it balanced the plot. Too bad, there were a lot of childish actions and jealousy, otherwise, I would have given it a 3,5.

Liked:
Patch. Again, he’s mysterious and kind of a stragner (for the reader) and that made the book for me. I didn’t believe for once that he was up to no good and I got that he was trying to help. He cared. But he couldn’t give away his motives behind his actions because of the rules. He’s a great romanticism combination comprising both good and evil inside him. Patch has a complicated past and therefore, complicated personality. He gets more humane throughout the book. He can’t feel physically, but he can feel emotions and cannot escape from them
Vee. Finally someone who makes this dark, dark story a little bit brighter. Her naivety bothers me the most about her, but I guess there are lots of people like her out in the world, so it brings reality to the story as well as laughter.

Didn’t like:
Scott. Annoying character who wasted valuable pages (kind of like Elliot did in the first book). I’m well aware of the author trying to portray him as a cute brother or something like that, but honestly, I couldn’t care less about him. The author didn’t go deep enough for me. He wasn’t too superficial and his storytelling wasn’t rushed, I don’t know.. I just couldn’t connect emotionally with this character.
Nora. Maybe I find so much of myself in her. Pride, for instance. I don’t want to spoil anything so I try to avoid any specifications, therefore, I can say that a lot of the bad things happend because of her pride. She set herself, her family, friends, even strangers in jeopardy. I wouldn’t actually classify her in this „category“, but I could say that she bothered me a little. Stubborn. The least likeable thing she did was probably accusing Patch, but love is blind and it’s har to think rationally, so I guess I can forgive her.