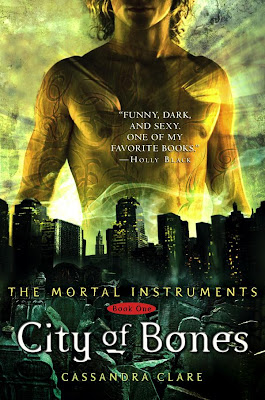 When fifteen-year-old Clary Fray heads out to the Pandemonium Club in New York City, she hardly expects to witness a murder — much less a murder committed by three teenagers covered with strange tattoos and brandishing bizarre weapons. Clary knows she should call the police, but it's hard to explain a murder when the body disappears into thin air and the murderers are invisible to everyone but Clary.
Equally startled by her ability to see them, the murderers explain themselves as Shadowhunters: a secret tribe of warriors dedicated to ridding the earth of demons. Within twenty-four hours, Clary's mother disappears and Clary herself is almost killed by a grotesque demon.
But why would demons be interested in ordinary mundanes like Clary and her mother? And how did Clary suddenly get the Sight? The Shadowhunters would like to know....

It didn’t seem like a book I could enjoy, but due to having read all the books I wanted to and I had not found anything else to read, I really had nothing to lose, considering that there were recommendations and reviews about the series everywhere: tumblr, youtube, facebook, blogger etc.
It was enthralling from the very first chapter and extremely fast-pace. It’s cool that it was kind of written from different points of view. The writing style is not exactly as Stiefvater’s („The Wolves of Mercy Falls“), because in every chapter the story is told by different people (not like umm.. first chapter is told by someone and the next is from a different point of view, sometimes more than one people is the one telling the story. And it’s not from my-point-of-view, it’s written in the past form). It mostly consentrates of telling the stories of Clary, Jace and Simon, but there are other characters, whose stories are important in the series, important enough to have a few pages of their own.
At first, I thought it sure as hell is not going to be something I like, I mean, it’s too supernatural etc, but it consumed me from the very first moment I started reading. It’s contemporary. It all takes place in NYC (at least in the first book, that is). Interesting and very easy to read.
A lot of different characters and I think that everyone will find someone, from the series, who represents one’s emotions, thoughts, nature. Most of the characters are layered, problematic young adults, who are discovering themselves troughout this whole mess. Everyone of them is growing and developing, some even during the first book already. Moreover, there are some important characters from older generations and they, also, have their problems and torments they’re trying to run from, and maybe even make up for. Because I’ve read all (published) 4 books, it’s hard to write and not to give too much away, but I’ll give my best not to spoil anything.
What I liked in Cassandra Clare’s books, is that the Shadowworld is totally undiscovered territory (for me, at least). Shadowhunters are nephilims, but while they are usually described as the offsprings of fallen angels and they have lost the angels’ favor, they’re not like that in Clare’s books. Shadowhunters are blessed by the angels and, therefore, they’re the protectors of mankind. It’s interesting, also, that when going to a battle, Shadowhunters cover themselves with different runes, which (e.g.) make them run faster, increase their endureness. The runes are deathly for humans and Downworlders (vampires, wolves, faeries, warlocks). They’re deathly and dangerous for Shadowhunters, also, if put on too young, usually 12 is the age limit. I liked the originality of this world (I repeat, I’ve never read anything like this) and Clare’s fanciful descriptions  she’s using to describe this world. Frankly, it was hard to imagine Forsakens and demons, but it was still interesting to read.
It’s pretty difficult to predict what’s going to happen. I hate it, when after reading half of the book, I already know how it all ends. Why Clary and Jace cannot be together is intriguing, shocking, sad and dramatic. At times, „City of Bones“ reminded me of Agatha Christie’s criminal novels, where everyone’s my suspect. Although, some of them seem so innocent and I cannot believe they’re capable of coldblooded murder, it’s usually the most unexpected one, who commited the crime. Why I compared Clare to Christie? Because in Cassie Clar’s stories there were, also, unexpected plotlines and it was hard to predict them. Even if I predicted some, it was for totally different reasons they turened out to be.
I enjoyed Clary, Jace, Luke, Isabelle and Magnus. Clary’s stubborn and cares about her loved ones and would not betray them or leave anyone behind or in trouble. She’s a great friend. Jace, on the other hand, is somewhat the same, but while Clary lets people inside, Jace keeps everyone away with his sarcasm and anger. Luke is great, helpful and cares about Clary as his own daughter. I loved reading about his and Clarissa’s father-daughter relationship. Isabele.. Umm.. Troughout the whole book, sometimes she seemed like this icequeen, but at times, she was like Clary’s best friend. I cannot bring out a certain reason why she appeals to me so much, but there is something in her, like a magnet, which draws people to her. The more I read, the more started to like Isabelle Lightwood. Magnus Bane. The High Warlock of Brooklyn. Mostlikely my favorite character. Witty, original, smart, caring, good-hearted (although, I have to admit, at first, he doesn’t seem like it, but I’ve read all of the books from TMI series, which are published, and I’ve also read „The Infernal Devices“  2 books and Magnus is in each of them, therefore, I can say that he’s caring and good-hearted). I cannot even express in words how much I like him. He’s just too freaking awesome. I would not mind if Clare decided to give Magnus his own bookseries.
As for Simon, I started to lik him in the sequels, but in the first one, he got on my nerves too much, although, he had his shiny moments, too.
Okay, here are some exerpts from the book and I’ll add the Greenhouse scene from Jace’s POV in the end, too. Hope you’ll enjoy.


“Do you remembr back at the hotel when you promised that if we lived, you’d get dressed up in a nurse’s outfit and give me a sponge bath?“
“Actually, I think you misheard,“ Clari said. “It was Simon who promised you the sponge bath.“
Jace looked involuntarily over at Simon, who smiled at him widely. “As soon as I’m back on my feet, handsome.“

Jace said, “Unfortunately, Lady of the Haven, my one true love remains myself.“
“At least,“ she said, “you don’t have to worry about rejection, Jace Wayland.“
“Not necessarily. I turn myself down occasionally, just to keep it interesting.“

“So when the moon’s only partly full, you only feel a little wolfy?“ Clary asked.
“You could say that“
“Well, you can go ahead and hang your head out of the car window if you feel like it.“
“I’m a werewolf, not a golden retriever.“


And here’s ’the Greenhouse scene’ from Jace’s point of view, which Clarenrecently published as a reward for her fans for voting for Clary (and Tessa).

I could not find any believable trailers and Clare’s production team has not done any for the books, so, I won’t add a trailer. If one wants to watch them, it can be found from youtobe, for example. Oh, and they’re making a movie, the project has started already, so far, Lily Collins (Clary) and Jamie Campbell Bower (Jace) have been cast.
Posted by Siiri at 3:25 PM