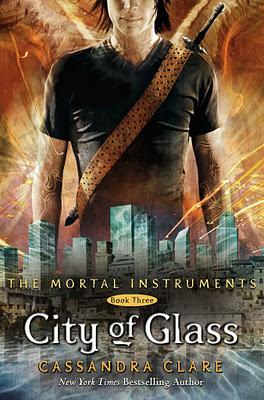 To save her mother's life, Clary must travel to the City of Glass, the ancestral home of the Shadowhunters — never mind that entering the city without permission is against the Law, and breaking the Law could mean death. To make things worse, she learns that Jace does not want her there, and her best friend, Simon, has been thrown in prison by the Shadowhunters, who are deeply suspicious of a vampire who can withstand sunlight.

As Clary uncovers more about her family's past, she finds an ally in mysterious Shadowhunter Sebastian. With Valentine mustering the full force of his power to destroy all Shadowhunters forever, their only chance to defeat him is to fight alongside their eternal enemies. But can Downworlders and Shadowhunters put aside their hatred to work together? While Jace realizes exactly how much he's willing to risk for Clary, can she harness her newfound powers to help save the Glass City — whatever the cost?


Third book of TMI series was definitely better than the second one and, in my opinion, reached the level set by the first book. What I loved the most was Luke’s and Clarissa’s father-daughter relationship. Luke’s Clary’s father, because he’s brought her up and took care of the girl and her mother. Lucian may not be her father by blood, but has always been there for her and loves her like his own. It was a bright storyline in the middle of a chaos and their fight for their loved ones was a joy to read.
Idris. I sometimes imagined a fairy-tale land and, at times, pictures from „Charlie and the Chocolate Factory“ and „Hans and Grete“ (hose made of sweets)  popped into my mind. I was a little dissapointed, because it wasn’t that beautiful, but I still liked the idea of a secret world not touched by modern technology.
I knew from the start who Simon’s cell mate was. I felt for him, a little, but he was a coward and, in some ways, he deserved his punishment and faith.
Again, Magnus. Cannot get enough of this guy!
I was very much moved by the book. I liked the idea of enemies overcoming theis insurmountable dissensions and fighting together for a good cause. How is it said.. Enemies of my enemy are my friends/allies? Sure looks like it.
The story of Lightwoods moved me to tears. No one deserves this kind of midfortune and trauma. I wanted to go into the book and hug all the family members, including Jace, take away their pain.
In addition to the traumas, sadness and war, it was a very passionate book. I looked forward to something like the Manor House scene infront of the Wayland’s residence for a very, very long time and was more than happy that it took place, finally. Cassie later wrote (this) one of the most loved scenes from Jace’s POV. Also, there is Jace's letter to Clary, which was published with some copys of (the fourth) book.

"But you’ve never druk fresh blood. Have you? Well, aside from mine, of course,“ Jace said. "And I’m sure my blood is fan-tastic.“
Simon set the empty flask down on the arm of the chair by the bed. "There’s something very wrong with you,“ he said. "Mentally, I mean.“

"And quit baring your fangs at me. It’s making me nervous.“
"Good,“ Simon said. „If you want to know why, it’s because you smell like blood.“
"It’s my cologne. Eau de Recent Injury.“ Jace raised his left hand.

P.S. This link is not the trailer of the book, it's a video of Jace and Clary and Jace's letter to Clary. In the movie these two should be played by Jamie Cambpell Bower and Lily Collins, therefore, it's a pretty good video to watch. Also, Sia's song in the backround is just amazingly beautiful!