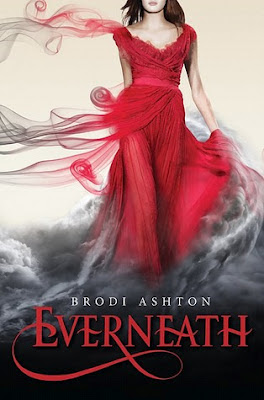 Last spring, Nikki Beckett vanished, sucked into an underworld known as the Everneath, where immortals Feed on the emotions of despairing humans. Now she’s returned—to her old life, her family, her friends—before being banished back to the underworld... this time forever.

She has six months before the Everneath comes to claim her, six months for good-byes she can’t find the words for, six months to find redemption, if it exists.

Nikki longs to spend these months reconnecting with her boyfriend, Jack, the one person she loves more than anything. But there’s a problem: Cole, the smoldering immortal who first enticed her to the Everneath, has followed Nikki to the mortal world. And he’ll do whatever it takes to bring her back- this time as his queen.

As Nikki’s time grows short and her relationships begin slipping from her grasp, she’s forced to make the hardest decision of her life: find a way to cheat fate and remain on the Surface with Jack or return to the Everneath and become Cole’s...

This is another great YA story and what's more important, it was original. I read a lot of the same material, but I'm actually so sick and tired of it. This was something fresh. I wasn't amazed by it, but I liked it. The reasons, you ask? Well.. I liked it because it wasn't your typical YA story where the heroine stumbles  upon a icy hot guy who needs to be saved by that special girl. No! I adored that Nikki was in love with Jack and Jack was the only reason for her Return from the Everneath since the only thing she remembered was his face and his brown hair.

If you like happily ever afters, I think it's not for you if you can't wait for the sequel, because this book left me in tears. I really hope the second or the final one will be happier, although I can't imagine what would there be to smile or laugh about.

The book itself is written in Nikki's point of view, but we get glimpses of her past with Jack. It's sweet and really gives the story a touch of love and happiness. Right now, Nikki is supposed to catch up with school, be a volunteer in a soup kitchen (due to her father's elections), say goodbye to her loved ones before her six months on the Surface is over and on top of that be tyrannised by Cole - the Everliving who fed on her for a hundred years.

Now that we've finally came to Cole, I can say that I expected to like him more than I did. He somewhat grew on me by the end of the book, but he was still the underdog, because Jack has suprisingly won my heart 100%. Cole is manipulative and sneeky, he has his moments of greatness, but he isn't that honorable. Jack, on the other hand, is like a prince on a white horse and he's the guy you want to end up with. Does that happen? Well, you may want to find out. Let's just say that his and Nikki's moments from the past aren't the only ones that make your heart beat faster.

Nikki was selfless, kind, protective and I liked her. She said it perfectly that you can't blame anyone else for the choices you make. They might've pushed you in that direction, but at the end of the day, you're the one making the choice.

So.. If I liked the book that much, why didn't I give it a 4 (or a 5)? I thought it could've been a little more action packed and there were moments where I figured out everything before Nikki and her companion did. I got to point out "ha, told ya!!" which isn't exactly what I want, I look forward to being suprised with my mouth left open and my thoughts speeding on a highway in my head. But.. It was a pretty good book and I will definitely be reading the sequel (which by the way has a gorgeous cover just like the first one).

“Heroes are made by the paths they choose, not the powers they are graced with.”

“Heroes don't exist. And if they did, I wouldn't be one of them.”

“Tell me why you care," I said.
He put his hands on the windowsill. "Because it's you. Despite what you think of me, your pain will always be my pain.”

“Tell me, friend. Is there more for us?"
I looked into his eyes, "There is everything for us.”