What a Boy Wants 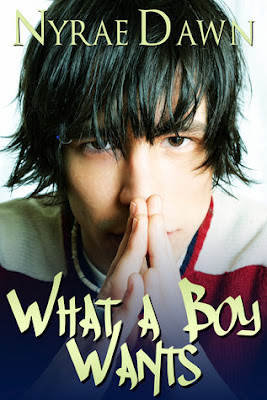 Courtesy of watching his mom’s relationships, Sebastian Hawkins knows what girls need to do to get a guy. He has what he considers a PHD in hooking up. When he needs extra cash for a car, Sebastian starts up an online venture as The Hook-up Doctor, to anonymously help girls land the guy of their dreams. Of course, his services don’t offer a happily-ever-after guarantee. He’s seen firsthand getting together never means staying together.

And then he falls in love…

With the last girl he would expect…

Totally not in his game plan.

Suddenly, Sebastian finds himself muddled in the game he’s always prided himself on. He can’t even pick up girls at parties anymore! Why would anyone want to be in love when it turns you into a stuttering, screwed-up, mess with really lame stalker tendencies? Stalking? Totally not his gig.

But the Hook-up Doctor won’t let himself go down easily. He’s always known how to give a girl what she wants and now it’s time to figure out what a boy wants… and he definitely plans on getting it.

It’s fun to read male POV’s, because there isn’t that many out there, especially in YA genre. I think it’s better to kick off with the cons of this book, so.. What I didn’t like was that everything was so unbelievably predictable. I knew from the start who was writing these emails, I knew how it’d all end etc. It was very, very easy to predict the plot. I also thought that Sebastian was a little slow to pick up clues and didn’t get everything right away, but hey! We’re all different and it just takes a little longer for some people to realize things.

All that being said, I really liked this book. It was easy to read, the pace was fast and it made me laugh out loud as well as broke my heart a few times. I loved the growth of Sebastian and that even though he was a ladies man (at the beginning of this novel), he still cared about his friends and his Mom. I know some guys who think the world’s their oyster and they don’t have to do a thing and are always so full of themselves – that's not attractive at all. Sebastian tried to be there for the ones he loves and tried his best to make them happy.

I liked the Woodstock nickname, it was cute. I liked Aspen in general – she was cool, easygoing, selfless, honest and fun. The thing I liked the most about Pricilla was her straightforwardness and protectiveness. Jaden (oh, Jay) – I really liked him. I get the feeling that everything’s not okay with him at home (I think I’ll get to know if I’m right in the sequel which is from his POV, jeeeii!!), but the thing I like the most about him is that even if everything’s not alright, he is still awesome, cares about his friends' well-being and makes the best jokes ever.

As I said, I really liked this book, but I couldn’t find it in my heart to give this book a four, because I found it sooooo predictable and I really hate it when I know everything before the characters get to figure these things out by themselves. However, if you want an easy read with fun characters, you like male POVs, friendships, romance and love a little drama, then this is definitely a must read for you.

“We're guys. Half the time, we don't know who we are. It helps things become a lot easier if we know who you are.”

“I'll be like your bodyguard or something. Me Tarzan. You Jane.”

“Our lips moved together perfectly. A perfect match. Because we had skills like that.”