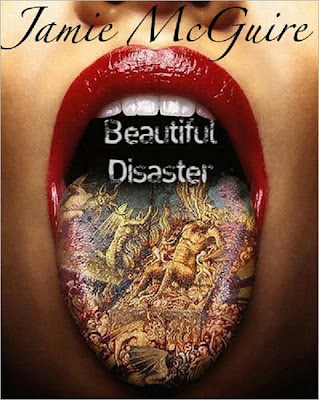 The new Abby Abernathy is a good girl. She doesn’t drink or swear, and she has the appropriate percentage of cardigans in her wardrobe. Abby believes she has enough distance between her and the darkness of her past, but when she arrives at college with her best friend America, her path to a new beginning is quickly challenged by Eastern University’s Walking One-Night Stand.

Travis Maddox, lean, cut, and covered in tattoos, is exactly what Abby needs—and wants—to avoid. He spends his nights winning money in a floating fight ring, and his days as the charming college co-ed. Intrigued by Abby’s resistance to his charms, Travis tricks her into his daily life with a simple bet. If he loses, he must remain abstinent for a month. If Abby loses, she must live in Travis’ apartment for the same amount of time. Either way, Travis has no idea that he has met his match.

Over a long period of time I read a novel which did not have any supernatural elements. Refreshing! “Beautiful Disaster“ is written by an American writer Jamie McGuire and her style is refreshing and interesting. The story begins as America (somehow her name reminds me of someone excotic from Puerto Rico or some place like that, not just a blond gorgeous girl) takes her bff Abigail to a fight, where his boyfriend’s (Shep) cousin, best friend and roommate Travis ’Mad Dog’ Maddox is about to start his fight. Travis is famous for his fights (and he never loses, btw) and for his one night stands. Abby’s a good girl. After the fight, when Travis sees Abby, their paths begin to cross. They become friends and soon they make a deal: if Abby wins, Travis will live a month in celibacy, if Travis wins, Abby will stay in his apartment for a month. It’s not hard to guess, what happens next.

BD is either a book to hate or love. I tend to do the last one. Not that it’s my favorite read (lately). No, definitely not, but it’s such and interesting and absorbing story. The author concentrates on telling the story of Abby and Travis (as well as Shep and America). It’s not the easiest relationship. It’s rather complicated. They’re the total opposites of one another, but both have a complicated past.

Abby is literally running from her past with America, trying to turn a new page, but with Travis, it all seems to come crushing down. She’s honest with him and straightforward. Tells him everything she thinks. No one does that. Travis listens to her and likes her honesty. He’s intrigued as Abby's not doing everything to get his attention and she’s not melting on every word he says. She stands on her ground even if it hurts Travis. They become good friends, but due to different circumstanses they have to share a bed and they spend all their free time together. But Travis isn’t the only one who’s being hit on, there’s a line behind Abby and it’s not something Travis’s happy excactly happy about. The question is: what can he do to win her over, because she seems to like him only as a friend and the shadows of her past haunt her when she’s with him and she definitely does not want to be another trofey of his.

I believe that a lot of the readers cannot stand their love-hate relationship, frown upon his impulsive nature and think that Abby should have walked away a long time ago. However, I think that no relationship is perfect and every person is one’s own, excactly like every relationship is different. Travis gave up a lot of his vices to prove to Abby and himself that he can be the better person. Travis was not the only one guilty in the fights they had. I’m not a psychologist or a counselor and a lot of you are right, form different aspects they are complitely wrong for each other, but at the same time they’re so right for each other.

It was hard to put the book down, because at the end of every chapter there were awesome cliff hangers and there were some big moments in every chapter as well. I liked it. It was refreshing to read such an emotional story about life and not to get distracted by supernatural elements. Everything is not always so black and white as it seems. There are highs and lows in friendships. Also, in love. It’s up to us to solve the problems and learn from them. After the dark clouds and deafening thunder there’s usually a ray of sunshine lurking from behind a cloud and a rainbow usually isn’t so far away either.

America rolled down her window and spit out her gum.
“You’re so obvious. Why didn’t you just roll in dog shit to make your outfit complete?“
“I’m not trying to impress anyone,“ I said.
“Obviously.“

“Now I’ve seen it all. I was just defended by a girl.“