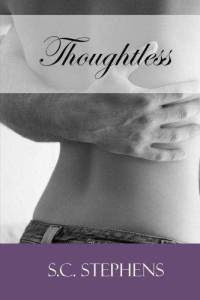 For almost two years now, Kiera's boyfriend, Denny, has been everything she's ever wanted: loving, tender and endlessly devoted to her. When they head off to a new city to start their lives together, Denny at his dream job and Kiera at a top-notch university, everything seems perfect. Then an unforeseen obligation forces the happy couple apart.

Feeling lonely, confused, and in need of comfort, Kiera turns to an unexpected source – a local rock star named Kellan Kyle. At first, he's purely a friend that she can lean on, but as her loneliness grows, so does their relationship. And then one night everything changes...and none of them will ever be the same.

S. C. Stephens’ “Thoughtless“ was a huge mess of emotions and I thought it was a quite pleasent read, although, I believe there are many of those who think it was such a huge mess that it was difficult to read and could not go all the way through with it.

At first I should probably mention that the heading is a little off, it should be something with the words blush and shyness. Thoughtless is great, yeah, but the main character, Kiera, is like the cancer from “Sponegob Squarepants“, because she’s literally blusing every two seconds. It kind of made me feel weird sometimes. That’s not very good, is it?

I liked both of the guys and was as torn as Kiera. Denny was a supporting, gives-away-his-heart kind of a guy, has a strong vision of his future, is hard-working and intelligent, which is quite the same as Kiera. Kellan, on the other hand, is emotional, humorous, creative, adventurous and takes risks. Both of them are incredibly handsome and great, both of them open their hearts, their souls, but which to choose?

The walk to the choice is like a storm in the middle of an ocean and there’s no land in sight. Kiera finds herself in the middle of an mind-boggling situation, where she loves both of them limitlessly, but is only in love with one of them. Which one? There are planty of these kind of situations in real life. Sometimes people grow apart, sometimes they grow together. Sometimes love just isn’t enough. But when there’s just lust and not love, the relationship won’t last long either.

At times I was really, really mad at Kiera, because she let things get out of her hands, but it’s easy to critizise from the top of my mountain. It’s hard to critizise yourself and peak to every dark corner of one’s soul and heart. Being in Kiera’s situation I bet a lot of people would lose their minds as well. How to ay no to a person who you’ve grown up with, who’s been your whole world and who you love more than anything? How to say no to a person who makes you feel alive, fresh and who gives you new experiences, who makes you feel something you never thought possible and who does not put their career first?

I must admit, I cried, I laughed, I was angry. By the way, I didn’t get Griffin’s jokes in the first book, but I laughed out loud more than I can count on my ten fingers during the second book. His stupidity and frivolity just make one grin.