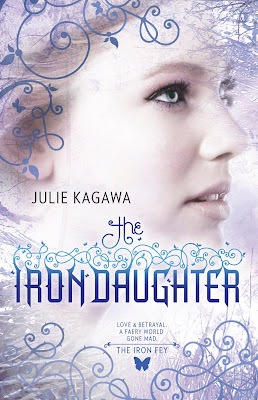 Half Summer faery princess, half human, Meghan has never fit in anywhere. Deserted by the Winter prince she thought loved her, she is prisoner to the Winter faery queen. As war looms between Summer and Winter, Meghan knows that the real danger comes from the Iron fey—ironbound faeries that only she and her absent prince have seen. But no one believes her.

Worse, Meghan's own fey powers have been cut off. She's stuck in Faery with only her wits for help. Trusting anyone would be foolish. Trusting a seeming traitor could be deadly. But even as she grows a backbone of iron, Meghan can't help but hear the whispers of longing in her all-too-human heart.


Meghan’s story is far from over and adventuers with Ash and Puck are waiting for her. I liked the beginning of the sequel, because I didn’t know anything about Winter Court, since only Summer Court and it’s faeries were introduced to readers, so it was a fun alternation. As you can guess, the faeries of the Summer Court are fun, playful, happy and beam with brightness and warmth. The faeries living in the Winter Court, on the other hand, are a total opposite of them: coldness, hardness, beating each other in everything, betrayal – these are the words to discribe them.

While Meghan’s life is turning from bad to worse with every second while trying to save the world of faeries and one cannot compare the life of this girl and her problems to an ordinary highschool girl, it’s good to know that as an alternative to this messed up situation Meghan can enjoy her life as a normal teenager. If only for a little while. The dance scene was pretty awesome.

Grimalkin is a funny little thing. As much as he tries to seem indifferent, it’s just a poker face he puts on, because anyone who’s read the series sees that Grim cares about this young heroine of ours and how her journey will end. He and Puck make this book worth reading for, because they’re not some kind of bad ass guys who make the hearts of the readers melt by showing humanity and their soft sides. They’re fighting on the good side and it’s funny to read how they’re trying to make it seem like they don’t stand each other’s company and are only helping each other due to this whole situation, but deep inside none of the four (Meghan, Puck, Ash and Grimalkin) would not like to walk down this road with someone else on their side.

Lanensidhe (or whatever the name of this muse was) bothered me so much I wanted to literally shut this book. „Yes darling; of course, pet; blah blah blah....“ It was getting tiresome to read about someone who I couldn’t stand at all if she was a real person, who’s so freaking fake and out for her own benefit only that it’s quite sickening to be honest. At least she helped Meghan and her friends a little bit.
I liked the sequel a lot more than the first book, because there weren’t so many new terms and descriptions so it was an easier and a lot faster read.

Here's a deleted scene from this book.

If this faery bitch wanted a fight, bring it on.

„Oh, look who’s talking. If you’re not an expert at screwing people over, I’ll eat my head“
...
This was as bad as refeering the frequent threat-fests between Puck and Ash. “Enough with the posturing and testosterone.“
...
“Hey, Rusty, why don’t you walk ahead of us, huh? I want your big ugly ass where I can see it.“

“How is Oberon these days? Still being henpecked by that basilisk of a wife?“

“Let’s get this party started.“

I laid my head on his chest and closed my eyes, content to touch him, to listen to his heartbeat. He sighed and rested his chin atop my head, and for a moment, neither of us spoke; we just swayed to the music.