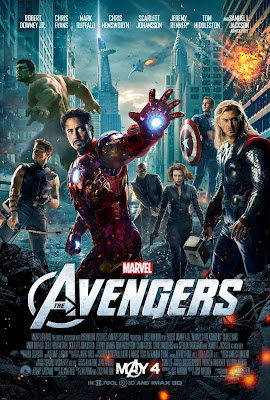 I've wanted to see “The Avengers“ since I found out of it in the very beginning. I read that the critics said some nice things about it, the audience loved it and I was really dying to see it. So I went and thought that this movie did not live up to the hype nor my expectations. I’m sorry to everyone who loved it, but I thought it was just blah.
I mean.. I looooveeee Robert Downey Jr. I love his portraying of the Iron Man. I like the sincerity of Captain America and Chris Evans. I love the power and presence of Thor (plus Chris Hemsworth is really swoon-worthy). I also think Scarlet Johansson’s beautiful and talented, but she’s not Russian and it was hilarious to see her portray one. However, I was glad that her accent (which at times wasn’t there at all and then out of nowhere came again) wasn’t that strong, because usually Hollywood goes over the top with the accents, so it was all good.

What I liked most about the movie was Tom Hiddleston and his Loki. I mean. Wow! Every time he was on screem the corners of my mouth just curled up in a grin. I liked this character from “Thor“ already, but this.. This guy’s absolutely worth the credit and this movie would’ve been nothing without him. I found it funny that Thor was the only character who tried to save Loki and get him on the right track. Well, of course there’s the whole half-sibling thing, but still. None of the other superheros gave him the chance to redeem himself or try to help him, they were all set out to destroy him.

Loved the reindeer comment. Loved the Hulk handling Loki in Stark’s apartment. Loved the bickering between Tony Stark and Steve Rogers. Loved the fights between the avengers, but what I did not love the 3D and the storyline. It was all so very and unbelievably boring. 3D kicked in during the 1/3 of the movie and I didn’t think much of it. I hated the storyline – it was so cliché and if it wasn’t for Loki and some jokes by Tony Stark I think I would have fallen asleep. There were too many characters and their issues were all different, therefore, there wasn’t any time left concentrating on them. I would have loved to see Loki even more and I think there should be a seperate movie about him only. With occasional clipmses of Hemsworth and Robert Downey Jr. of course.  Well, one can dream. I still hope this amazing character will get a movie of his own, he deserves it.

I think all Marvel fans should see it and I think everyone who loved some of the previous work by this studio from the past few years should go and check it out themselves. Even though I wasn’t that amazed by this piece of work, it was nice, entertaining and full of action. I just expected more.
Posted by Siiri at 1:21 PM