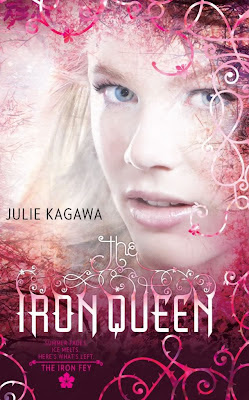 My name is Meghan Chase.I thought it was over. That my time with the fey, the impossible choices I had to make, the sacrifices of those I loved, was behind me. But a storm is approaching, an army of Iron fey that will drag me back, kicking and screaming. Drag me away from the banished prince who's sworn to stand by my side. Drag me into the core of conflict so powerful, I'm not sure anyone can survive it.This time, there will be no turning back.
A war between the faeries is about to go down. Meghan has to find a way for her friends and other faeries to stay alive and she’s taking on another adventure with her previous companions – Ash, Puck and Grimalkin. They have little time left as the Iron realm is slowly taking over the land of faeries and everyone they’ve known are about to die in poisoning caused by the Iron kingdom ruled by the False King Ferrum.

This installment, in my opinion, was the best of the series and I wished it would have lasted even longer. It was such an emotional rollercoaster: laughter alternated with melanholy , then came laughter again, then melanholy etc. It was an enjoyable read and I thought that Meghan’s growth from a confused child to a young, mature and a stong woman was tremendous and admirable.

As always, I loved Ash’s protectivness, Puck’s up-beat personality and sarcastic jokes, Grimalkin’s wisdom and mysterious behavior. It was a well written piece of work and the characters were at their highest peaks when it comes to growth, jokes, action etc. They were great! The story was awesome and I absolutely loved it. I didn’t thought I’d like a book from this series as much as i liked this one, I really didn’t. It was very unexpected and also a pleasant suprise.

I thought the battle was well-described and action-packed. I loved the ending and I loved that Kagawa had the courage to do such a thing. It was beautiful and unexpected. Moreover, it was extremely sad. Until the last few paragraphs, that was. Loved the very last line, by the way! And what I also liked was the bromance between Puck and Ash – even though they do not admit to being friends, it’s easy to see that neither of them wants to hurt one another, despite stating otherwise, and they’d do anything to protect Meghan and keep her safe.

Yep, this was by far the best book of this series. And again, I just have to mention that I’m in love with the coverart – it’s absolutely beautiful.

“You mortals do not know what you have until it is gone.“

“Hey, princess“
“Hey,“ I wispered, as he slipped his arms around my waist from behind, drawing me close.

I knew better. Fairy godmother’s didn’t exist, and even if they did, they wouldn’t wave a magic wand and make everything better. Besides, I had something better than a fairy godmother; I had my faery knight, my faery trickster, and my faery cat, and that was enough.

“Be quiet, Goodfellow,“ Ash growled, peering into the shadows with narrowed eyes. „“We’re not alone.“
“Yeah? How do you figure that, prince? I don’t see anyone.“
“The cait sith has disappeared.“
“...crap.“